Home » Lifestyle » Daniel Radcliffe Does Not Have Coronavirus 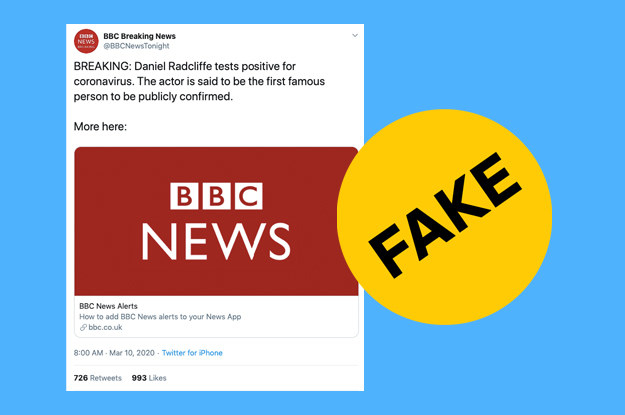 A fake BBC Twitter account posted a false claim about actor Daniel Radcliffe having tested positive for the coronavirus.

In response to a question asking whether Radcliffe had tested positive for the virus, the actor’s publicist said, “Not true.”

The account was registered under the username @BBCNewsTonight and used the British broadcaster’s logo.

“BREAKING: Daniel Radcliffe tests positive for coronavirus,” the false Tweet said. “The actor is said to be the first famous person to be publicly confirmed.”

The tweet also included a link to the BBC News Alerts page, but it seems to not have been updated since 2017 and led to the broadcaster promoting its email newsletters, apps, and other services. There was no evidence of the false claim in the link.

The account also used Twitter’s new option to hide some responses to hide a tweet from a BuzzFeed News reporter debunking the fake.

Although the tweet seemed credible at first glance, going to the main profile revealed it was clearly a fake. The account had only 125 followers. It has since been suspended. A spokesperson for Twitter did not immediately respond to a request for comment.