Professional dancer Michelle Ryan was in Paris practising a duet when she first noticed a strange tingling in her legs.

She was diagnosed with multiple sclerosis and every morning afterwards she would wake up wondering, "Can I still feel my legs?"

"Unfortunately, there was a time when I couldn't stand up," she recalls. 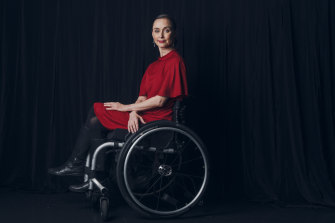 Michelle Ryan was awarded one of the eight Australia Council Awards for outstanding achievement in the arts.Credit:James Brickwood

For the next decade Ryan worked behind the scenes in dance, bringing to fruition other artists' visions and dreams, and then in 2011 she performed a three-minute solo in the Brisbane Festival.

"My soul just flew in that moment, and it made me realise the absolute importance of the arts in someone's life," she says. "It was a real life-changing moment where I thought, 'Oh, I can actually bring something to this world, hopefully, that will celebrate difference and diversity, to not shy away from it, to actually embrace it'."

Ryan was awarded on Monday night one of the eight Australia Council Awards for outstanding achievement in the arts.

It's Ryan's use of her lived experience of disability to inform all her artwork, "with humour, warmth and searing honesty", that made the South Australian dancer, choreographer and artistic director such a worthy recipient, according to Australia Council's chief executive Adrian Collette.

Ryan worked with DanceNorth, helped found Splintergroup, and in 2013 was appointed artistic director of Restless Dance Theatre, an Adelaide-based company that works with artists with and without a disability. With Restless, Ryan has taken the company to mainstream audiences and toured works nationally and internationally. Intimate Space  played at the Seoul Street Arts Festival last October.

Likewise, Conway was honoured for her ''significant and eloquent contribution" to Australian music over a 40-year career.

The ARIA award-winning artist fronted the post-punk band Do-Ré-Mi, and pursued solo opportunities before launching her own record label Intercorps in 2004 alongside husband and long time collaborator Willy Zeigler.

Conway collaborated with female artists to tour Australia as part of the Broad Festival project and in 2008 was appointed artistic director of the Queensland Music Festival, in this role commissioning 20 new works and presented more than 300 musical events.

Looking back, Conway says the internet has been the ultimate disruptor of the music business, a "canary in the coalmine" for other artistic industries. "Who would have thought in 2020 that we would be celebrating live music as much as we do? " she says. "Because that's what it has come down to: it's all about playing live, connecting with people in the flesh, in a room. There's silver linings everywhere."

If Conway had one piece of advice for her younger self it would be this: "Pay more attention to what's going on."

"I loved the freewheeling nature of not knowing what's going to happen next, and I still do." But she thinks she might have let people take advantage of her. "There are wolves out there particularly in the music industry and they are very eager to lure in young artists who are very excited about making music, and not particularly concentrating on the longer implications of that. And it has always been thus."

Ryan says the biggest message of her career is "to always evolve".

"Try and always be bold and sometimes adversity can bring about fantastic things," she says.