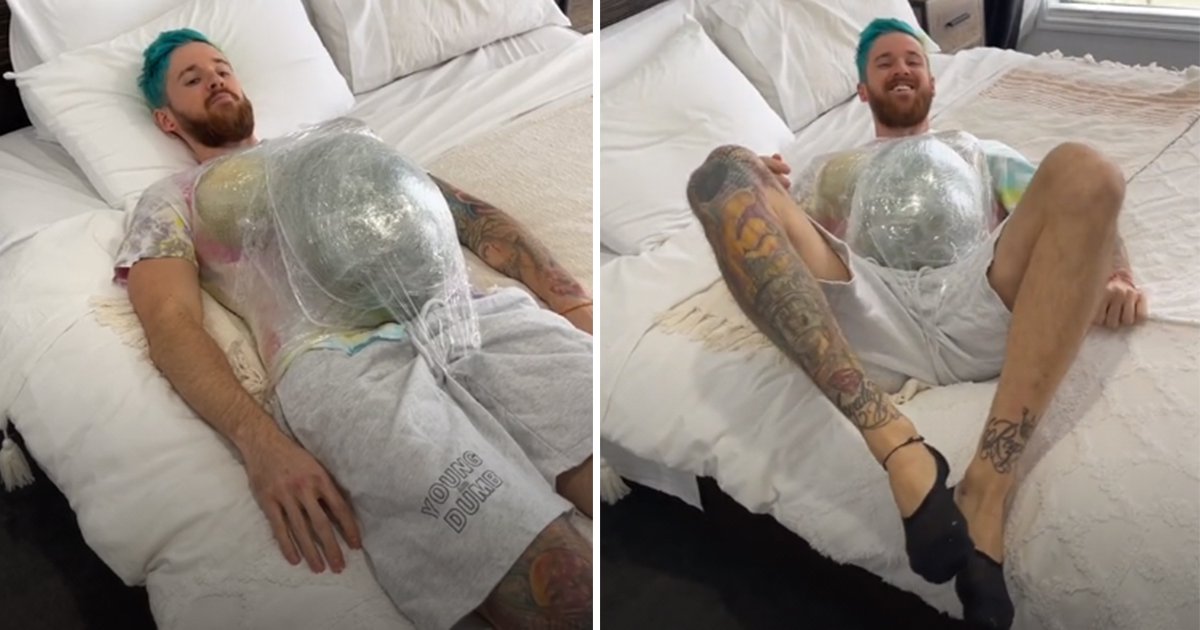 A man who wanted to see what it was like to be pregnant for a day has had a rude awakening about the uncomfortable realities.

Maitland Hanley, from Brisbane, Australia, who has recently had a baby with his partner, mimicked a pregnant belly by attaching a watermelon to his stomach using cling film, before wrapping another two melons to his chest to imitate bigger breasts.

In the video, which has been liked more than one million times on TikTok, he starts off by lying on the bed, as though he has just woken up.

A woman is heard pretending to make the sound of an alarm clock, and tells him to get up to start the day.

Maitland doesn’t appear to think that the makeshift baby bump will hinder him, and he even says ‘watch this’ before attempting to shift himself from the bed.

But the the weight awkwardness of the additional weight and different body means it’s really difficult for him to get into an upright position. He can’t get off the bed.

After trying again he manages to swing his legs off the bed so his feet touch the floor, but he still struggles to sit upright. The weight of his belly keeps him pinned to the bed, flailing helplessly.

It’s a funny sight, and a friend who is watching from the doorway can be heard laughing in the clip.

‘I thought it would be so much easier,’ says the dad.

In the comments, people had opinions.

While some were left in hysterics, others were critical of Maitland’s technique.

‘You have to roll you can’t just fling yourself or you’ll pull a ligament in your side,’ said one.

‘Don’t forget all the ligaments are loose so you just popped a hip,’ added another, referring to another symptom of pregnancy.

‘Why is he not using his hands? Pregnancy took his ability to think,’ joked another.

Not quite a walk in the park, is it Maitland?