A father-of-two who nearly had his ventilator switched off when doctors described him as ‘one of the sickest Covid patients’ has been sent home after nearly a year in a London hospital.

Andrew Watts, 40, from Bexley,  began to feel unwell and was admitted to Queen Elizabeth Hospital, in Woolwich, with Covid-19 pneumonia on Christmas Day 2020.

In February, after a five-week induced coma and a life-threatening lung collapse, doctors called his family to tell them they were considering switching off his ventilator.

However Andrew was able to make a recovery and, after eight months in intensive care and two months on a ward, was able to go home after 300 days in the hospital.

Being on a ventilator for months meant that Andrew had to learn to talk and walk again, telling MyLondon: ‘I kept thinking, “Why me?” It was very hard to stay positive.’ 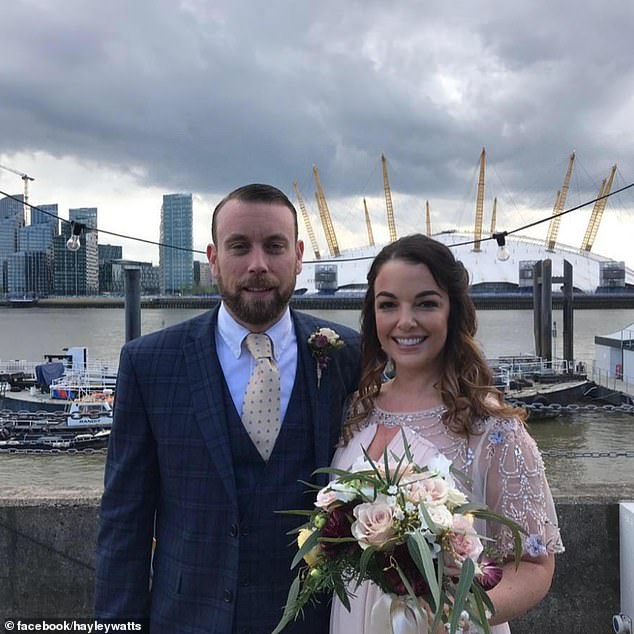 Andrew Watts, 40, from Bexley, who nearly had his ventilator switched off when doctors described him as ‘one of the sickest Covid patients’ has been sent home after nearly a year in a London hospital (pictured with his wife Hayley) 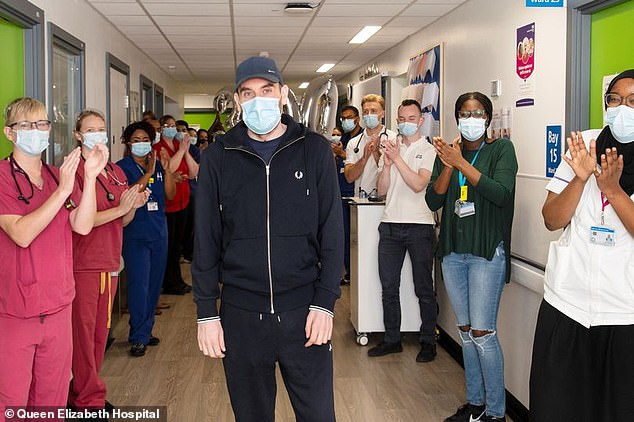 However Andrew was able to make a recovery and, after eight months in intensive care and two months on a ward, was able to go home after 300 days in the hospital (pictured)

He spent much of 2020 carefully shielding due to being classed as vulnerable, and his chemotherapy treatment had been successful.

He was on the mend a year later, with doctors telling him he was in remission.

However weeks before Christmas, the father-of-two began to feel unwell, with little appetite. 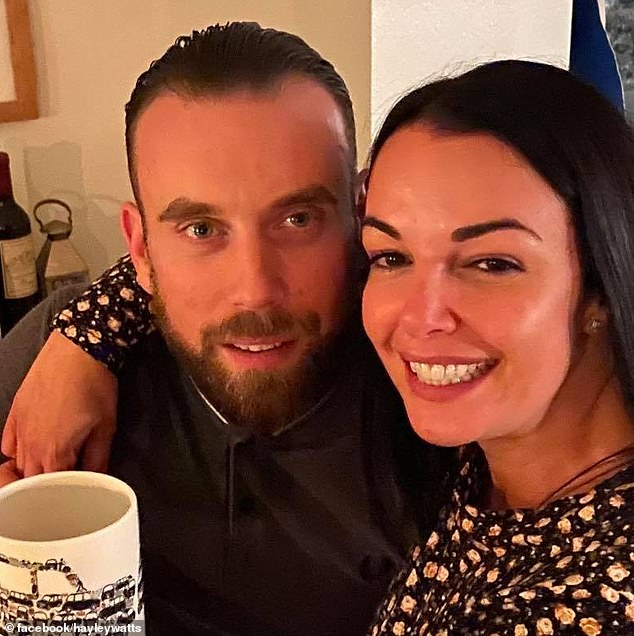 He began to feel unwell and was admitted to Queen Elizabeth Hospital, in Woolwich, with Covid-19 pneumonia on Christmas Day 2020 (pictured with his wife Hayley)

He said he was ‘losing weight’ but thought it was ‘just anxiety getting to me.’

His health deteriorated and he was admitted into hospital but he initially responded well to treatment.

However his oxygen levels began to drop and he was taken for a CT scan, where he was told he had a pneuomothorax, which is a split on the lung.

He said: ‘I was on my own as this was the height of Covid, with no visitors allowed, so it was a lot to take in. 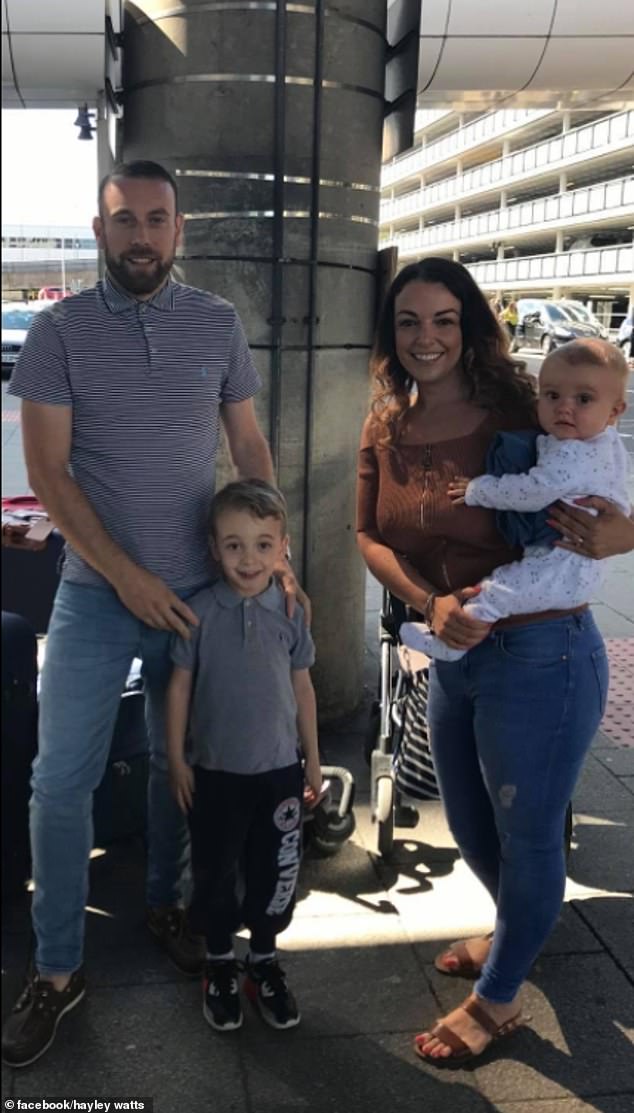 Andrew was placed in induced comas on several occasions, with his family being told he was gravely ill (pictured, with Hayley and their sons Jack and Joshua) 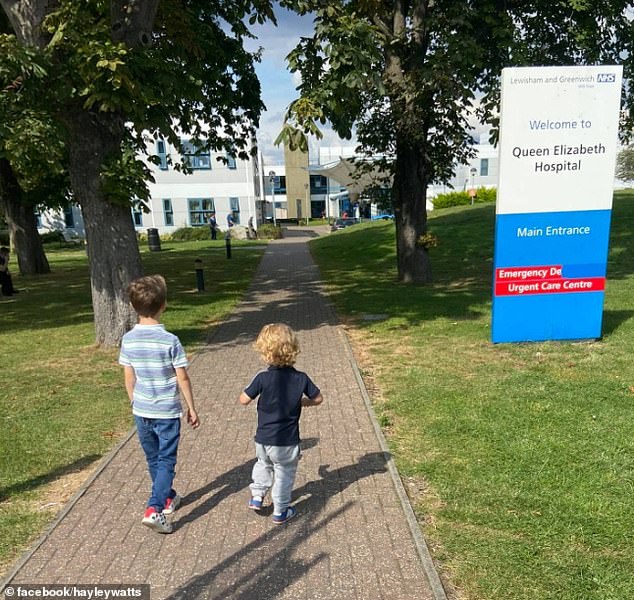 It was only in June 2021 that Andrew’s wife Hayley and sons Jack, six, and Joshua, three, were able to visit him in hospital

Cancer patients with solid tumours are just as able to fight off coronavirus infection as people without the disease, a study has found.

But people suffering with a blood cancer appear to be less able to fight off Covid-19 due to a milder immune response following infection.

The findings come from a new study funded by Cancer Research UK and offer a glimmer of hope to cancer patients who may be shielding during lockdown.

The research has been published online in Cancer Cell and has been peer-reviewed.

‘By this point I was crying my eyes out, on the phone to my sister Hannah and my wife Hayley, but I didn’t want to tell my mum or my dad. I couldn’t bring myself to tell them.’

He was placed in a coma for over a month, with medical staff calling his family to tell them he was gravely ill.

The father-of-two pulled through but remained on a ventilator, with doctors warning his family weeks later that they might have to turn the machine off.

However after a second lung collapse, Andrew’s health began to improve and he was able to come off the ventilator in June 2021.

It was only then that his wife Hayley and sons Jack, six, and Joshua, three, were able to visit him in hospital.

However due to being on a ventilator for so long, Andrew was forced to learn to walk and talk again, communicating with his family by pointing a stick at letters on a board.

He was slowly getting better when suddenly his left and right lung collapsed again, and he was placed in another induced coma.

He said: ‘I came around with tubes down my throat again. I was so upset. I’d been doping so well and it seemed like it was all for nothing.

After eight months on ICU, he was moved onto a ward, where he spent two further months recovering.

Two weeks before he was scheduled to go home, his occupational therapist accompanied him for a trip back to the house, something he confessed he was feeling ‘very nervous’ about. 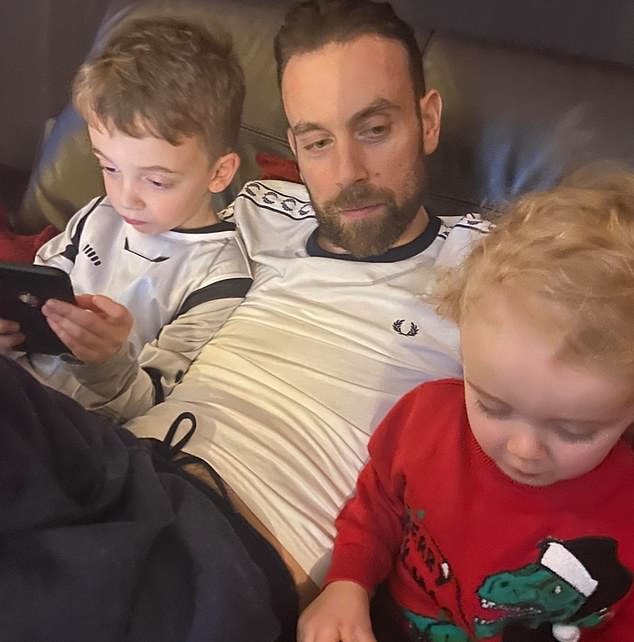 When he was discharged, medical staff, including doctors, nurses, physios and speech and language therapists turned out to say goodbye on October 21.

Hospital staff lined the corridor in Ward 23 to say an emotional goodbye to him.

He said he aims to be able to walk to his son’s school and back by Christmas this year.

Meanwhile Dr Dan Harding, Consultant in Intensive Care Medicine, explained: ”He was one of the sickest Covid patients we’ve seen, so to see him walking out of the hospital with his family was a very happy and emotional day for me and all the other staff involved in his care.

UK’s ‘longest-suffering Covid patient’, 49, dies following 14-and-a-half month battle after deciding to withdraw treatment because he ‘could not live like this any more’

Jason Kelk, 49, opted to withdraw all treatment after deciding he could not ‘live like this any more’ in St James’ Hospital in Leeds, West Yorkshire.

The primary school IT teacher, from Leeds, remained there ever since, until when he was transported to a nearby hospice, where he spent his final hours surrounded by his family.

He leaves behind heartbroken wife Sue, 63, as well as five step-children and eight grandchildren.

Sue said her husband’s battle had become too much and that he had come to the decision to stop treatment. 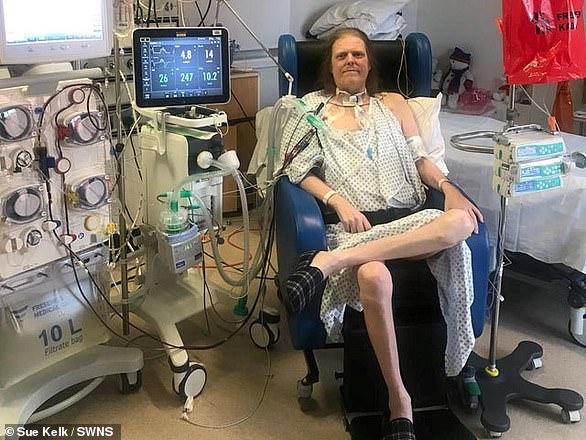 Jason Kelk, 49, (pictured) opted to withdraw all treatment after deciding he could not ‘live like this anymore’ in St James’ Hospital in Leeds, West Yorkshire 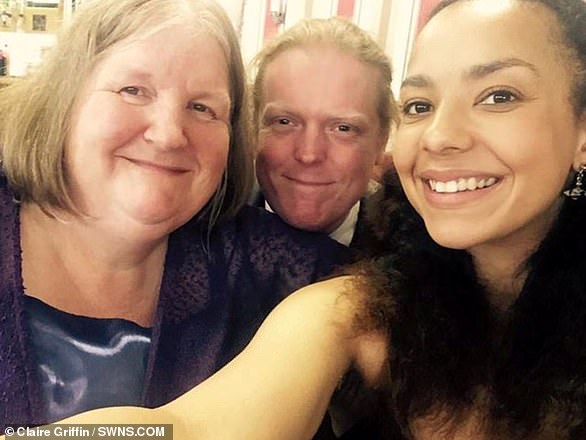 His heartbroken wife Sue Kelk, 63, (pictured on her wedding day with Mr Kelk and her daughter) said her husband’s battle had become too much and that he had come to the decision to withdraw all treatment 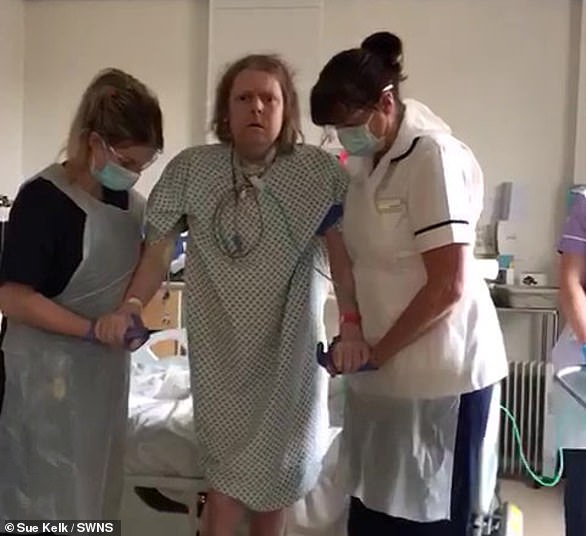 Mr Kelk – who had type II diabetes and asthma – was admitted to hospital (pictured) on March 31. Just days later, on April 3, he was transferred to intensive care

Paying tribute to her ‘soulmate’ of 20 years, Mrs Kelk added: ‘It was so peaceful. It was definitely important for him to do it on his terms.

‘But he is leaving an awful lot of people absolutely bereft. 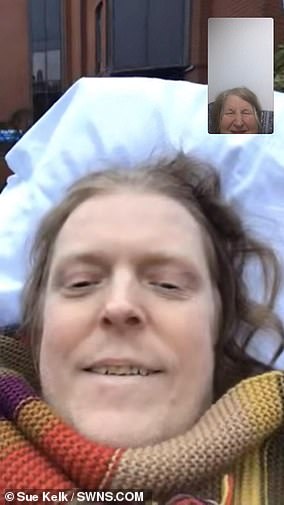 ‘And I just think that this is the bravest thing that you could ever do – to actually say “I don’t want to live like this anymore”.’

Mr Kelk – who had type II diabetes and asthma – was admitted to hospital on March 31. Just days later, on April 3, he was transferred to intensive care.

He remained there ever since, fighting for his life on numerous occasions after the virus ravaged his lungs and destroyed his kidneys.

Mr Kelk went on to develop such severe stomach issues that he was having to be fed intravenously when he died.

He suffered regular vomiting bouts as a result of gastroparesis and was unable to walk unaided for most of his time in hospital.

The ordeal was even more challenging for the couple as Covid restrictions meant they have only been able to see each other a few times while he’s been on the ward, instead having to communicate via other means such as Face Time calls.

There was hope in March this year when he marked 15 days in a row without the use of a ventilator.

He was taken off a 24/7 kidney filter and was enjoying outdoor family visits in the hospital grounds once a week.

And before that, Ms Kelk said she felt about ’10 foot tall’ when he managed to walk with assistance for the first time in February.

At the time he revealed his hopes of returning to his home in Leeds, saying he wanted to ‘sit on our sofa and eat take away fish and chips with Sue while we watch telly’.

However, he did add: ‘I’ve lost hope on a few occasions, mainly because even now the destination I’m working towards seems so far away.’

As Mr Kelk’s recovery continued, he was able to drink cups of tea and eat cake, as well return to one of his passions – computer coding.

But at the beginning of May he took a turn for the worse and ended up having to spend a few days on and off the ventilator before going on to develop two infections.

Mrs Kelk said her husband ‘never really recovered’ from them.

He was left needing the ventilator full-time again and Mrs Kelk said it was at that point he decided he had had enough.

She said: ‘He just wanted it all to come to an end. The antibiotics had worked but his spirit had gone.’

Mrs Kelk added: ‘I think really Jason from February 2020 disappeared. That’s the Jason we knew. But the Jason everybody loved was still very much there.

‘I think I have been preparing for myself since the beginning. Not that I haven’t believed he could do it.

‘In the last few weeks before his relapse I was just beginning to go ‘maybe I can hope now’ and then I got kicked in the teeth.’ 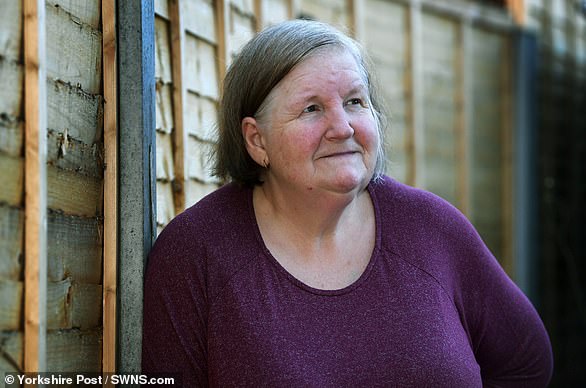 Mr Kelk was surrounded by his wife as well as his mum, dad and sister when he died this morning.

He leaves behind five stepchildren and eight grandchildren – two born this past year who he has never met – and another on the way.

Mrs Kelk said she will miss his sense of humour and him ‘just being there’ the most, adding: ‘[My daughter] Katie wrote a beautiful poem about him and said we were soulmates and that’s exactly what we were.

‘We finished each other’s sentences half the time. We just knew instinctively what the other one wanted. We just complemented each other.’

‘It certainly has been a very fun life with him. We have done some fun things – but we had lots of things that we were going to do.’