Home » Lifestyle » Could this at home kit transform fertility treatments for women?

Could a vintage fertility device from the 1910s get YOU pregnant? £300 at-home insemination kit that works by holding semen close to the cervix for up to 12 HOURS to go on sale in the UK

A new £300 intracervical insemination kit based on a 1910s design is promising to transform modern fertility treatments for women.

Intracervical insemination is a form of artificial insemination that involves placing semen close to the cervix for an extended amount of time, usually 4-12 hours.

For between £250-£300 per month, customers will receive two insemination devices  as well as 20 ovulation tests, several pregnancy tests and two semen containers.

The aim is to make fertility treatment accessible to all, and counteract the unfair IVF ‘postcode lottery’ women and couples experience on the NHS by not placing restrictions on the age of the mother, relationship status, or financial situation.

Tess told FEMAIL: ‘Our mission at Béa is to democratise access to effective fertility treatments; providing people with more options.’ 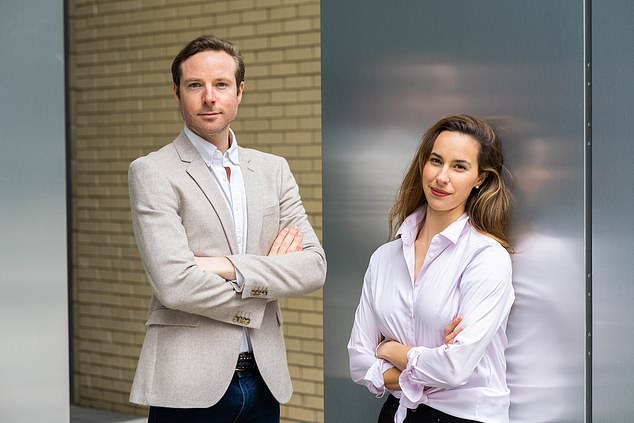 Founded by embryologist David O’Rourke and femtech specialist Tess Cosad, Béa Fertility is designed to bring a new clinical-standard, at-home fertility treatment to people who are struggling to conceive naturally

David, a clinical embryologist, said he was inspired to launch the product due to his own experiences as a doctor.

He explained: ‘I’ve spent many years working in fertility and feel passionately about widening access to a bigger range of treatments.

‘I knew that ICI interventions had strong rates of success, but that they’d fallen by the wayside as fertility clinics focused on the more expensive IUI and IVF end of the market.

‘That sparked the idea for an ICI treatment that could be easily handled by the couple, at home, helping them take control over the next step of their journey to conceive. 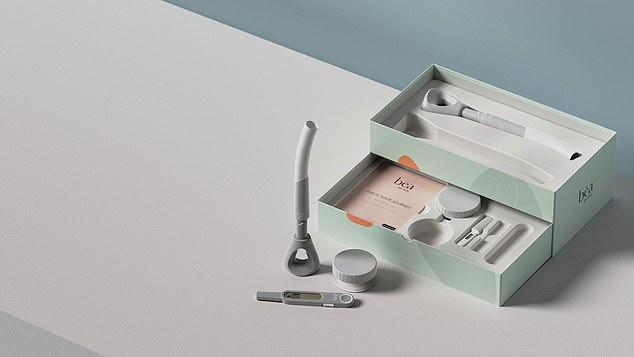 For between £250-£300 per month, customers will receive two insemination devices as well as 20 ovulation tests, several pregnancy tests and two semen containers (pictured)

And Tess said ICI was the go-to clinical fertility treatment on offer in the UK. up until the 1970s.

She told Refinery29: ‘It was the original form of artificial insemination and as early as 1910 and 1920, you would find clinics offering this in various shapes or forms.’

After three years and over 90 prototypes, he met with Tess in late 2019, a marketing specialist with  experience working with several technology companies.

The £300-per-month at HOME fertility treatment

Intracervical insemination is a form of artificial insemination that involves placing semen close to the cervix for an extended amount of time, usually 4-12 hours.

The method involves using a device to place a small cup of semen close to the cervix, where it’s left in-situ for 4-12 hours.

In the meantime, women can go about their days as normal and there are  no invasive hormone treatments or injectables involved.

Two weeks after the treatment, women can test for pregnancy, and will also receive ovulation tests each month, to help keep track of ovulation patterns and treatment plan.

It operates on a monthly subscription basis, providing users with: two ICI devices, ovulation tests, pregnancy tests, and access to an app to help track ovulation dates and the progress of their fertility journey.

The intracervical insemination (ICI) device comprises of an insertion apparatus which is used to place a silicone cup filled with sperm onto the cervix, where it stays for four to 12 hours.

The subscription will cost around £300 per month.

The method involves using a device to place a small cup of semen close to the cervix, where it’s left in-situ for 4-12 hours.

In the meantime, women can go about their days as normal and there are  no invasive hormone treatments or injectables involved.

Two weeks after the treatment, women can test for pregnancy, and will also receive ovulation tests each month, to help keep track of ovulation patterns and treatment plan.

David said: ‘We’ve gone through over 90 iterations of the product to reach the right balance of effectiveness and user-friendliness and we can’t wait to start helping couples improve their chances of having a baby.’

The co-founder of the product suggested its appeal was that it works at home and is ‘natural’, meaning there are no drugs associated with stimulating a cycle.

Tess explained: ‘ICI is clinically proven to be highly effective when it comes to increasing the chances of conception, but it’s not made available to people at the beginning of their fertility journey.

‘Instead, they have to take a big leap into the expensive world of invasive treatments.

‘But for people where there’s no medically-identified issue causing infertility, ICI can be the ideal way of maximising their chances of getting pregnant. 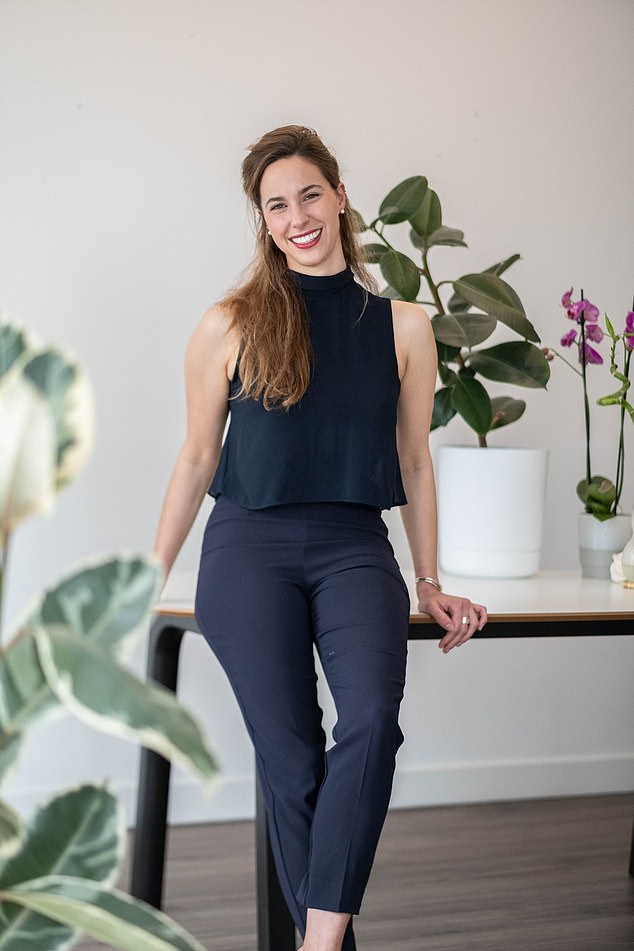 ‘We’re designing a product that enables people to do this easily and affordably, all from home.’

She continued: ‘Infertility is sadly still a taboo and something we don’t talk enough about, meaning people often struggle through it alone.

‘There’s something so empowering about taking your fertility journey into your own hands, and this is why I’m so passionate about launching Béa Fertility.

The National Institute for Health and Care Excellence (NICE) recommends women in England and Wales aged under 40 should be offered three cycles of IVF treatment on the NHS if they meet their guidelines.

However individual NHS clinical commissioning groups (CCGs) make the final decision about who can have NHS-funded IVF in their local area – meaning several women are falling victim to the ‘postcode lottery’ of IVF.

In August it was revealed that women seeking IVF treatment on the NHS, in some areas of England, must prove they are in a three-year ‘stable’ relationship to get funding.

In Cornwall, a patient must have a partner of two years and be in a ‘financially interdependent’ relationship to be eligible for treatment, according to the policy for Kernow CCG. But in Devon, single women are allowed IVF on the NHS.

Revealed: How IVF success rates are 3.6 TIMES lower in some parts of the UK than others – with one clinic giving women just a 12% chance of getting pregnant

IVF success rates are three-and-a-half times lower in some parts of the UK because of a cruel ‘postcode lottery’, experts warned last year.

Women having the procedure at St Jude’s Fertility Clinic in Wolverhampton have just a 12 per cent chance of having a baby.

By contrast, the success rate of an IVF cycle at University Hospital Coventry – just a 50-minute drive away – is 43 per cent.

The disparity was described as ‘cruel and unjust’ by charities who said couples shouldn’t be denied the chance to become parents based on their ‘postcode or pay packet’. 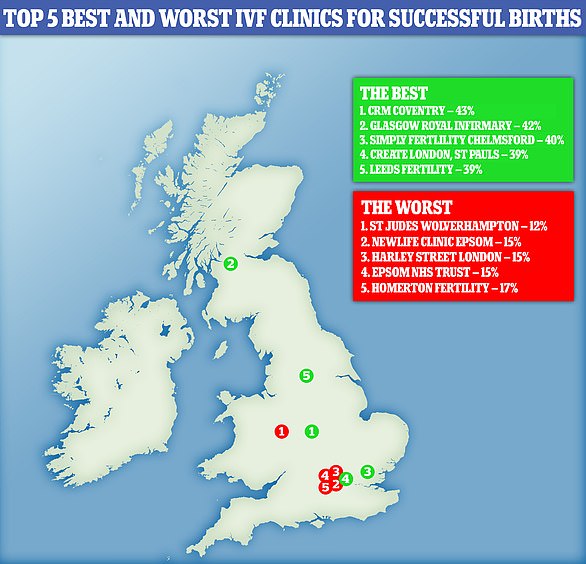 IVF success rates are almost four times lower in some parts of the UK because of a cruel ‘postcode lottery’, experts have warned. The top five best and worst clinics are shown (source: University Hospital Coventry)

A normal IVF cycle costs between £3,000 and £5,000. But couples may have to fork out at least ten times before a pregnancy at some clinics.

Just 15 per cent of cycles resulted in a birth at the New Life fertility centre in Epsom, Surrey, the second poorest performing clinic in Britain.

Glasgow Royal Infirmary has the second highest success rate (43 per cent), according to 2017 data published by UK’s fertility watchdog in December.

‘Access to quality fertility treatment should be dependent on your medical need, not your postcode or pay packet.

‘The UK pioneered IVF over 40 years ago, but that achievement means nothing if only those who can afford to pay for private fertility treatment benefit from it.

‘Facing fertility problems is distressing enough, without being denied medical help because of where you live.’