CONOR MCcGREGOR insists UFC "needs people like me" as he vowed to fight on despite breaking his leg in defeat to Dustin Poirier.

The Irish superstar has now lost three of his last four bouts and awaits surgery after being carried off on a stretcher with horrific injuries.

But having yelled "This is not over!" as Poirier left the octagon, McGregor was just as defiant in his first social media post.

His opening-round agony in Las Vegas left Poirier 2-1 up in their trilogy fight, with UFC chief Dana White promising a FOURTH showdown.

Some fans argued his day has passed, but others sent supportive replies like: "Heal up champ."

White confirmed McGregor will need an operation after his promising start to the UFC 264 showpiece turned into a gruesome conclusion. 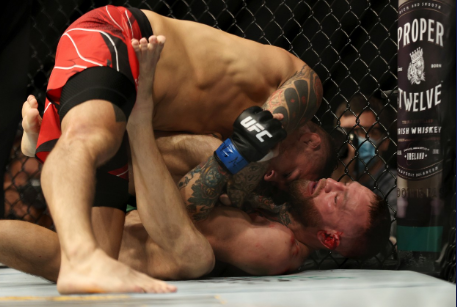 He landed some dangerous kicks and clean punches before the bout turned scrappy and went to the floor.

And late in the first round, McGregor's ankle and leg gave way as he got up and tried to throw a punch.

Medics rushed in as he yelled: "Tell them 'doctor stoppage'".

White said: "We've got to see how this whole thing plays out. Conor goes into surgery tomorrow.

Poirier himself appeared unhappy at the prospect of a fourth encounter, emphasizing: "I beat the guy."