A Harvard-educated concussion expert wants the major football codes to ban tackling in children’s sport until the age of 14, warning Australia is significantly behind the United States and United Kingdom in combating the brain disease known as chronic traumatic encephalopathy (CTE).

“No sport should accept repetitive head impacts before the age of 14,” Nowinski told The Sydney Morning Herald and The Age. “Let’s start there. Parents don’t hit their own child in the head, and we need to remove this cultural veil, in that it happening in sports is OK for the developing brain. It’s not.

“That means in soccer there is no heading, and in the [other] football codes there is no tackling. You can play a tag or flag version of the game until age 14 and get all the benefits of exercise and teamwork without sowing the seeds for a brain disease that will kill some of them. It shouldn’t be a debate.”

The United States Soccer Federation banned heading for children aged 10 or under in 2015, while the English Football Association will begin a trial next season to forbid the practice for under 12s.

Non-tackle rugby league options – such as touch football and Oztag – continue to rise in popularity in Australia. Nowinski said they should be the only options available in the code for children until they become teenagers. 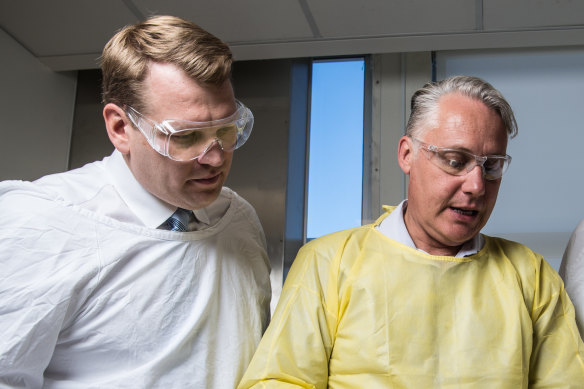 The proposal will be part of his latest campaign called “Stop Hitting Kids In The Head”, which will be unveiled in Sydney on Wednesday as part of the launch of the international chapter of the Concussion Legacy Foundation, which Nowinski co-founded in 2007.

“We know down the road some of those kids will develop a brain disease … because of being hit in the head,” he said.

“When we learnt smoking caused lung cancer we made it illegal for children to smoke. Now that we’ve learnt head impacts cause CTE, we have a very important decision to make about whether a child should be allowed to play a game that could cause CTE when there are so many alternative versions of the sport that don’t.”

The concussion crisis has become a big topic in Australia’s major sporting codes over the past decade. Despite improvement in player health and welfare, the question remains whether the governing bodies are doing enough.

South Sydney captain Cameron Murray is eager to play in the NRL elimination final against arch-rivals the Roosters on Sunday – nine days after being concussed in the second tackle of the opening night at Allianz Stadium.

The Roosters’ Victor Radley is also expected to feature, only a fortnight after convulsing on the ground after a concussion in a match against the Storm.

Both players are reportedly symptom free after their respective brain injuries. 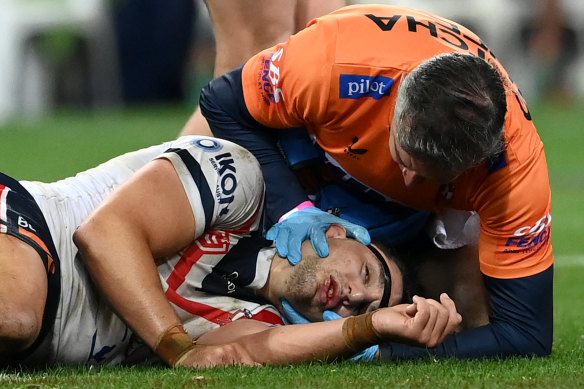 Roosters star Victor Radley after a head knock during a game against the Storm in August.Credit:Getty

While not commenting on individual cases, Nowinski had a blunt appraisal of Australia’s major sporting codes, saying an increasing number of former athletes were being diagnosed with early onset dementia in care homes.

“It’s the canary in the coal mine reminding us CTE is here in Australia,” Nowinski said. “CTE is primarily an issue in English-speaking countries and I would put Australia behind America, the UK and Canada – by a long shot, unfortunately.

“We’re still talking about concussions as a cause of CTE, which they’re not. And we’re still debating cause and effect where it’s not being debated in other countries. It’s even accepted by the NFL. People are struggling with the long-term effects of concussion and CTE, so we’re here to help patients and families.”

Late Canterbury legend Steve Folkes was the first professional rugby league player to be diagnosed with CTE in 2019.

The brain disease is associated with behavioural and mood problems such as depression and anxiety. The Australian Sports Brain Bank found 12 of the 21 athletes it had examined since its inception in 2018 showed signs of CTE. Three donors with CTE were under the age of 35.

A research letter said suicide could be a risk factor of CTE, with six of the 12 athletes who had CTE having taken their own life.

The family of former Rothmans medallist and premiership-winning Cowboys coach Paul Green donated his brain to science after he died by suicide last month.

If you or anyone you know needs immediate support, contact Lifeline on 13 11 14 or via lifeline.org.au. In an emergency, call 000.

Stream the NRL Premiership 2022 live and free on 9Now.

Sports news, results and expert commentary. Sign up for our Sport newsletter.