Home » Lifestyle » Coarse language warning: what the Forky is going on?

During Toy Story 4, a father realises that his Winnebago has a flat. Blood rises in his face. His jaw clenches. His wife, sensing an outburst, ushers their two kids away from the vehicle, whispering: 'Daddy's going to say some words now…'

Not that we hear them. The scene ends as focus switches to Buzz Lightyear, seeking to rescue Forky and Woody from the antique store. Sorry, spoiler alert. Promise I won't tell you if the plan succeeds. Yet I feel obliged to say that Bo Peep's sheep loses a leg at one point, and Woody misplaces his larynx for a time. 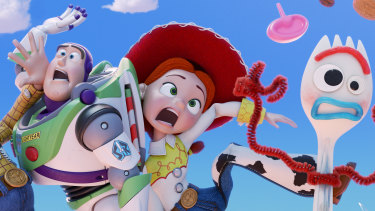 Daddy’s tirade is off screen in Toy Story 4.

So much for the violent scenes. As for the movie's language, aside from Daddy's implicit tirade, the Pixar-Disney script is pretty clean. No shits or damns, no skanks or hells. And none of those prime suspects in the Cuss Department, specifically, wait… You may be shocked. Please, if coarse language offends, head for the gardening section while you can.

Before seeing most films, from Toy Story 4 to Ocean's 13, you can check for blue language with a mouse click. The service is Know Before You Go, a survey of new and recent releases as provided by The Australian Council of Children and Media (ACCM). Drugs, violence and sex are also foreshadowed, from Bo Peep's sheep to and a sumo wrestler's bum-crack (one among several Oceanic cautions).

For parents of young kids, that's one handy peek. (Ride Like A Girl, the biopic of jockey Michelle Payne, comes with a fusillade of 'get stuffed', 'stinky' and 'dingbat' – allowing potential viewers to make an informed decision.) Yet that sort of mollycoddling is rare in modern media. As consumers, we tend to cop what comes, and not all of us thrill to that idea.

Last month the ABC released a research report on Community Attitudes Towards Coarse Language in the Media. Urbis, a social planning outfit, polled 1538 people about their own tolerance to salty nouns. The takeaways (a word some may find more offensive than bugger), were intriguing.

Streaming services, according to respondents, have upped the invective ante – where clients opt in for the given experience. Not surprisingly, perhaps, older teens and younger adults were less trouble by swearing, while females had a lower tolerance to blue-talk then males.

The takeaways (a word some may find more offensive than bugger) were intriguing.

Last month, the ABC's Mad As Hell unleashed its own pandemonium by dropping six F-bombs in 28 minutes. No small effort for prime-time. Going by the Urbis survey, that meant 46 per cent of the audience was likely to take umbrage, compared to just 8 per cent when a few shits were uttered.

On the shock scale, the c-word sits at 20 per cent, a lowish figure in league with nigger (6 per cent), bitch (4 per cent), slut (2 per cent) and that Oedipal allusion to mothers (also 2 per cent). Despite these last few slurs barely scoring on the huff-o-graph, the same 1538 respondents claimed to be most concerned when language was used to vilify or degrade another.

Of course, context is paramount to any language debate. When Tosh Greenslade (playing an American investment guru on that same Mad As Hell episode) unloads with effs, the effect is authenticity. Alive with subprime hooey, the skit is more seemly than seamy. Ditto for Afro-American rap lyrics enshrining the n-word, or a Netflix hostage drama where no kidnapper worth their name could yell 'Schweppes' or 'fudge' – or 'cabbage', as Socrates deployed to keep his tongue pure.

Few want kids being exposed to coarse language, going by the Urbis research. Hence the handiness of the ACCM service, or viewer warnings preceding TV shows. Call it bleep-creep, but the new normal includes a lot more #@&!* and ^!&#~, and what the cabbage are you going to do about it?