Home » Climate changemakers fighting for environmental justice: “This is what transformation is about”

But recently their paths crossed when Shoupe’s work took him on a 350-mile journey to Woodberry’s church. And although they are two very different people from two very different places, they discovered they had something in common: they are both determined to use the challenges posed by environmental neglect and climate change and turn them into opportunities for their communities.

In the first two installments of a new CBSN series, Climate Changemakers, CBS News meteorologist and climate specialist Jeff Berardelli traveled to Kentucky and South Carolina to tell the story of environmental heroes trying to make a difference in their communities by tackling two issues central to the climate challenge: environmental justice and a just transition.

A “just transition” in Coal Country

For the past 200 years Kentucky has been a hub for commercial coal. Scott Shoupe, his father, grandfather and great-grandfather all worked in the mines of eastern Kentucky. Like any extractive industry, coal has had its share of booms and busts, but more often than not there was good money to be made. 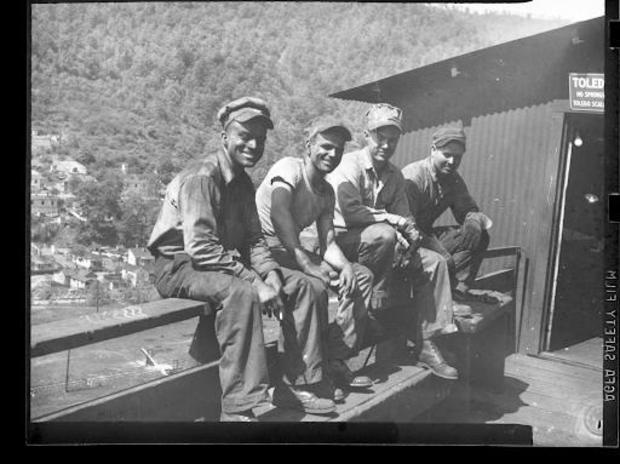 But the allure, he explained, is about much more than just money. “When you’re sittin’ on top of 100 years of coal mining, and that’s all you know, that’s all your papaw did, in some cases your mamaw did it. People are just proud of where they’re from and what they are.”

In fact, coal mining was so ingrained in Shoupe’s identity that even his father’s near-fatal mine accident when Scott was a child was not enough to deter him from following in his father’s footsteps.

As is typical for coal miners, Shoupe’s 20 years in coal left him with health issues like black lung disease and vertebrae damage to his back. He is also battling stage four cirrhosis of the liver, which he feels is somehow related to coal contamination. He has been on the liver transplant list for eight months now. 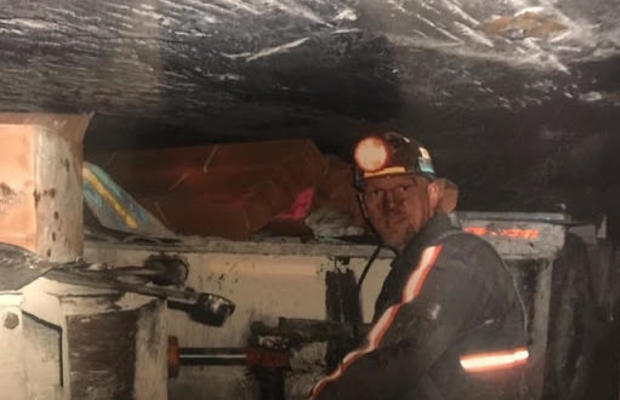 Despite all this, he says emphatically that he has no regrets about becoming a coal miner. Many of his neighbors feel the same way. There’s a lot of pride in the history of these coal communities.

Up until about a decade ago, coal made up the lion’s share of electricity production in the U.S., with Appalachia as the industry hub. But with the boom in fracking and natural gas production around 2010 and, more recently, the lower prices of renewable energy, coal mining in this area — and coal jobs along with it — have mostly disappeared.

Since 1985 the number of coal jobs has plummeted by 75% nationwide, and in eastern Kentucky that number is closer to 85%. With the loss of jobs, financial and health hardships have followed. In eastern Kentucky, 1 in 3 people fall below the poverty line and the mortality rate is twice the national average.

But these issues are not simply the result of the recent bust in coal, says Peter Hille, the president of the Mountain Association, a nonprofit organization trying to spur economic growth in eastern Kentucky. To the contrary, Hille explains that these problems are long-term and systemic, and that what these communities need now is a more diverse economy — “An economy that’s more sustainable, more diverse, more resilient, and more equitable. An economy that works for everybody.”

Over the past several years, as coal jobs disappeared, Shoupe began to realize kind of environmental damage the industry left behind, like abandoned mines and contaminated water. “When they walk in here like they did at the end of 2012, and shut every operation in the area down, it kinda gives you a realization that something’s gonna change.”

So in 2018 he left the coal business and signed up for a six-month New Energy Internship through Hille’s organization, funded by a cooperative federal and state program called the Appalachian Regional Commission’s POWER Initiative. There he trained to utilize some of the same skills he developed working in coal, but apply them to jobs in green energy.

“I was part of the problem for a long time. So I guess now I wanna be part of the solution,” he said. He started a business called New Age Solutions that works in renewable energy, like installing solar panels, and energy efficiency. 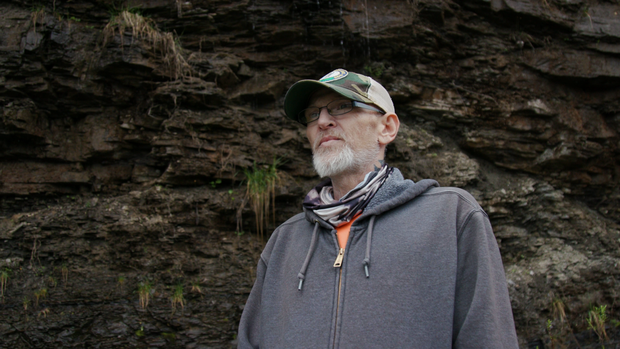 But so far, such success is the exception, not the rule. Hille says the region needs serious and sustained investment — a “just transition” from the old economy to a new one.

“The justice that we talk about in just transition is grounded in the realization that the people in these places have sacrificed a lot to literally fuel the growth of the entire nation. And there’s a debt that’s owed for that. They’ve sacrificed lives, they’ve sacrificed health, families, ecosystems, educational systems, health care systems. As a result these  communities struggle with a host of problems that they did not create,” Hille told CBS News.

If President Biden is able to push his agenda through Congress, communities like Scott Shoupe’s will get some of the help they need. In his Executive Order on Tackling the Climate Crisis, Mr. Biden called for for “federal resources to revitalize the economies of coal, oil and gas, and power plant communities.”

Mr. Biden’s proposed $2.2 trillion infrastructure bill would invest heavily in the green economy, with proposals that include funding the POWER Initiative that helped train Shoupe, bankrolling the reclamation of old coal mines, and capping abandoned oil and gas wells.

Shoupe said, “We’ve always been a world provider in energy. And we can still do that. We just gotta progress with the times, you know?”

Watch Part 2 of the series, the story of Reverend Leo Woodberry’s clean water and environmental justice initiative, on Tuesday, May 25 at 1 p.m. ET on CBSN.

A few months ago, Scott Shoupe’s new career path took him to Reverend Leo Woodberry’s church in Florence, South Carolina. He was there installing Source Hydropanels — a revolutionary technology that uses solar power to pull pure, clean water from the air. For Woodberry, these panels represent an opportunity to help his community address water insecurity, a problem he says is pervasive there.

Woodberry is both a preacher and champion of environmental justice. He believes, as sons and daughters of God, it is our job to care for the earth — a concept called “creation care.” 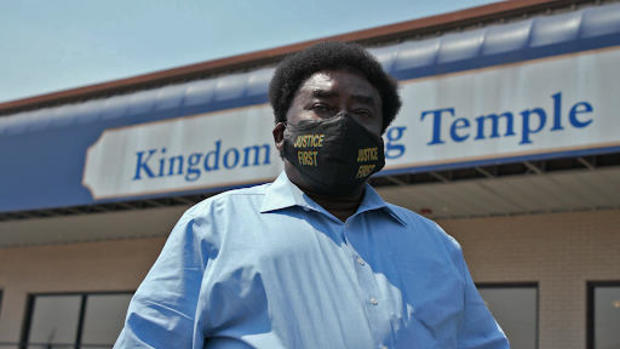 Care for nature and the underserved in his community are a core part of his teachings to parishioners at his Kingdom Living Temple in Florence. When he is not preaching, Woodberry spends a lot of time working on environmental justice solutions, especially polluted water.

From 2015 to 2018 his area was hit by three massive floods — two of them were from hurricanes Matthew and Florence — each considered to be the type of flood that statistically the area would expect to see only once every century or so. Woodberry says flooding from storms or sea level rise is becoming more common in the area because of human-caused climate change.

“We don’t have to wait for flooding anymore. If you go to Georgetown, Myrtle Beach, if you go to rural areas like Brittons Neck, Sellers, Nichols, here in Florence, you don’t have to have a storm for there to be flooding.”

And when it floods, runoff from farms and sewage systems seeps into the water supply, contaminating it with pesticides, herbicides and bacteria. It is especially problematic in impoverished communities that have old, poorly functioning pipes and infrastructure. This leads to frequent “boil water” advisories and a distrust of the water system among people who can’t afford to buy a lot of bottled water.

“How often would you say water is in an issue here in South Carolina?” Berardelli asked.

“Every day. Every day,” Woodberry replied.

“So there is a fundamental distrust of the water system as a whole?”

In response, he arranged for Shoupe set up four Source Hydropanels just outside Kingdom Living Temple as a small demonstration project, which the reverend hopes to expand on soon. 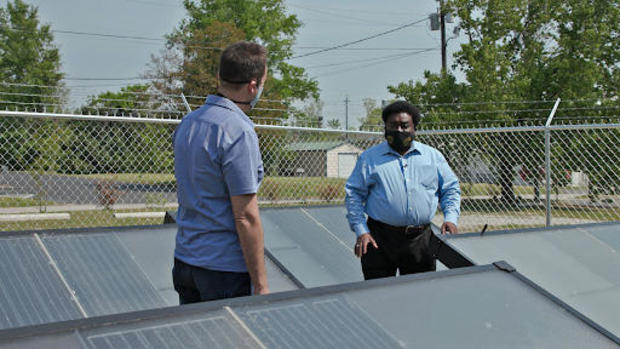 Shoupe is drawn to this work because he knows firsthand what it’s like to live in an area where you can’t trust the water. In his own home state, he said, “You could only imagine what all is left behind in these [coal] mines, covered up and buried. It finds its way into our rivers and streams.”

The technology behind Source Hydropanels is proprietary, but here’s an overview of how it works. Powered entirely by solar energy, the panels pull air into the unit, where it is heated. That air is pushed through a special material that absorbs moisture. That moisture is then condensed into water and collected. Minerals are then added for composition and taste.

Although the panels produce more water in wet climates, they are also being used in arid regions like the Navajo Nation in the Southwest. On average, in 12 hours a panel will produce a little more than 3 liters of water in high humidity and a little less than 2 liters in low humidity. Multiple panels together increase the output.

And while the technology can’t produce enough water to sustain entire communities, Woodberry says it still helps. “You can install some in a backyard of homes where people have lead pipes. You know, when you have a climate crisis, you can move in, so people don’t have to wait for generous donations to come in by truck.” 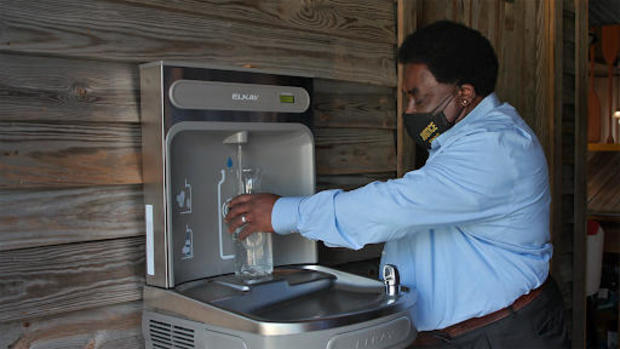 During our time in South Carolina we traveled to the small community of Brittons Neck, an area devastated by all three floods when the Little Pee Dee River overflowed its banks, forcing about 2,000 local people from their homes.

To help this community, Woodberry is in the process of buying a seven-acre plot of land. He plans to construct what he calls a “water garden” made up of 100 Source Hydropanels, and open up a small bottling plant for the community. He says it should be enough to make 20,000 bottles of water a month and create a few jobs.

“As we transition from a fossil fuel-based economy to a clean, renewable energy or sustainable economy, we have to make sure that we create jobs for people, particularly low-income people and people of color who have and are bearing the brunt of the climate impacts and the pollution.”

Although Reverend Woodberry and Scott Shoupe have led very different lives in different places, their goals have intersected. Together they are working towards a green economy and a more just society.

“This is what transformation is about. This is what democracy is about … everybody working together,” Woodberry said. “We believe that the Earth is a magnificent place that is intersectional. And we need to do all we can to keep that.”