China’s Zhurong rover drives on the surface of Mars for the first time, making the country only the second nation after the US to land and operate a vehicle on the Red Planet

The Zhurong rover has begun its exploration of the Martian surface, cementing China’s place as only the second nation to land and operate a rover on Mars.

The solar-powered rover rolled out of the lander, touching Martian soil for the first time at 03:40 BST on Saturday, the China National Space Administration (CNSA) revealed.

Part of the Tianwen-1 mission, which also includes an orbiting satellite to relay data back to Earth, the lander touched down on Mars on Saturday May 15.

Named after the Chinese god of fire, Zhurong, the rover worked to run a number of diagnostic tests before it began its exploration of the Martian surface.

It is expected to be deployed for a minimum of 90 days to search of evidence of current or past life on the Red Planet. 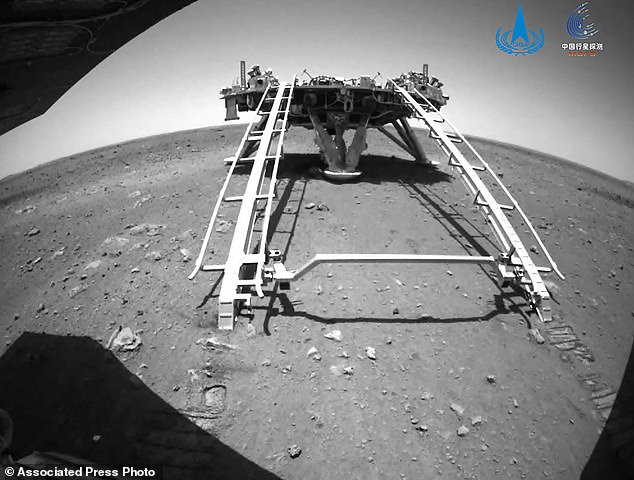 On Saturday, May 22, 2021, a landing platform and the surface of Mars are seen from a camera on the Chinese Mars rover Zhurong 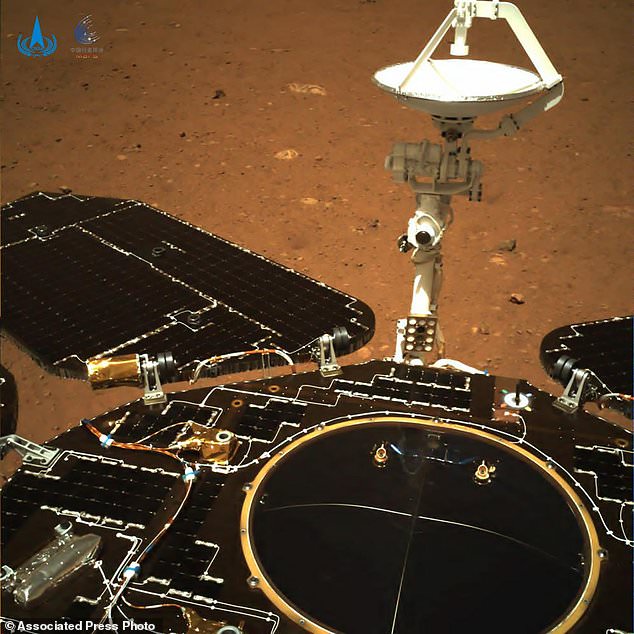 INSTRUMENTS ON THE ZHURONG ROVER

The Zhurong rover communicates with Earth via the Tianwen-1 orbiter which has a ‘high speed data relay’.

Instruments on board the rover include a high-resolution camera that will be used for navigation and sharing images of the Red Planet surface.

The plain is the largest impact basin in the solar system, with an estimated diameter of 2,050 miles and home to large volumes of underground ice.

The six-wheeled 530lb rover has a climate detector, subsurface radar, magnetic field detectors and a camera to capture images and chart maps of the planitia.

Its primary goals are to analyse the Martian soil and analyse the atmosphere of the Red Planet, capture images and chart maps while it roams the surface and study the composition of both soil and rocks it comes across.

Zhurong is the third rover currently operating on Mars, following in the footsteps of NASA’s Curiosity rover that arrived in 2012 and the relative newcomer Perseverance.

Perseverance arrived on Mars on February 18 and spent the first three months preparing and monitoring the technical demonstration of the Ingenuity helicopter.

It has a similar objective to Zhurong, to search for signs of ancient life on the Red Planet, and is about to begin that mission in earnest now the Ingenuity demonstrate has ended and the helicopter begins a new phase aiding the rover.

Perseverance has an extended mission – to grab rock and soil samples and deploy them on the surface in dedicated capsules that will be collected later.

A ‘fetch’ mission by the European Space Agency will grab these capsules and a NASA launcher will put them into orbit where they will be returned to Earth by 2031. 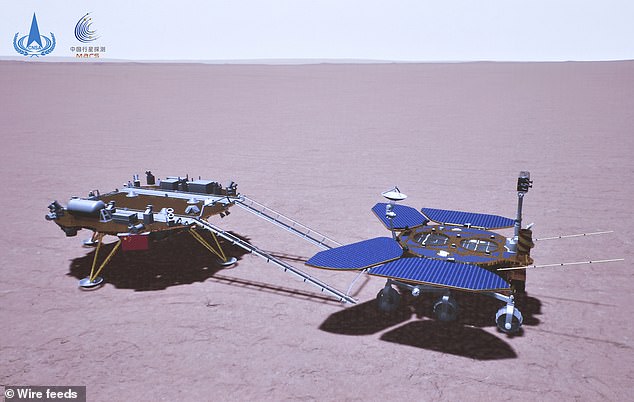 NASA confirmed that Perseverance should grab its first sample from the Martian surface at some point in July.

Before the CNSA landed on Mars, the US and Soviet Union were the only nations to have made a successful soft landing on Mars and the US the only nation to deploy and operate a rover on the Red Planet.

Several US, Russian and European attempts to land rovers on Mars have failed in the past, most recently in 2016 with the crash-landing of the Schiaparelli joint Russian-European spacecraft as Mars is an ‘incredibly difficult’ place to land.

The European Space Agency (ESA) was due to land the British-built Rosalind Franklin rover on Mars in February this year, but the launch was delayed by Covid. 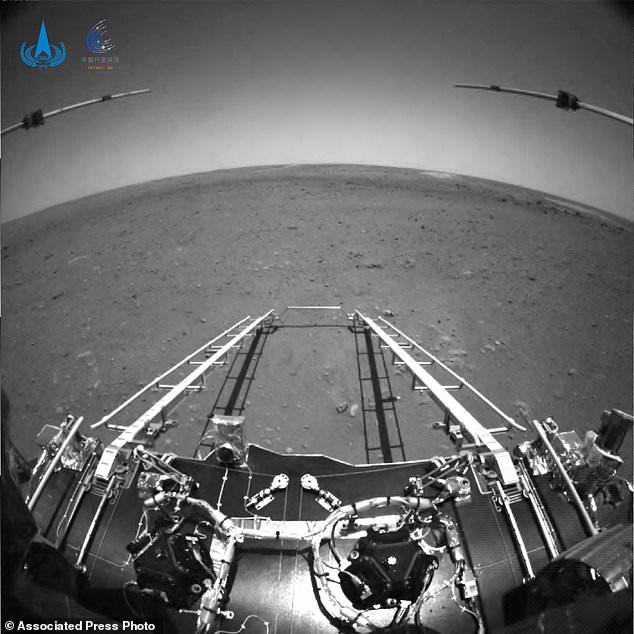 It will now launch towards the end of 2022, landing on Mars in 2023 to search for signs of ancient life – it will be the first rover to also include a drill.

China has ambitious space plans that include launching a crewed orbital station and landing a human on the moon.

It successfully launched the first module of its new space station last month with hopes of having it crewed by 2022. 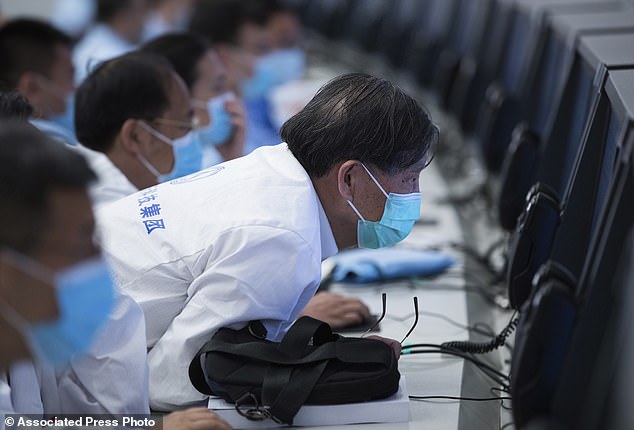 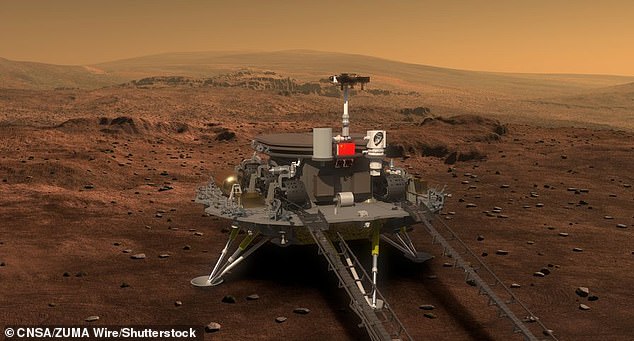 Last week a segment of the Chinese Long March 5B rocket disintegrated over the Indian Ocean in an uncontrolled landing back to Earth.

That drew criticism from the United States and other nations for a breach of etiquette governing the return of space debris to Earth, with officials saying the remnants had the potential to endanger life and property.

The CNSA has also signed a memorandum with the Russian space agency Roscosmos to build a station on or in orbit around the moon.

In 2019, China became the first country to land a space probe on the little-explored far side of the moon, and in December returned lunar rocks to Earth for the first time since the 1970s.

Officials from the Chinese space agency are working to become a space superpower alongside the US and Russia.

They have already sent the first lander to explore the far side of the Moon – sharing photos from the part of our nearest neighbour we rarely see as part of the Chang’e-4 mission.

In November 2020 they sent the Chang’e-5 space probe to the Moon to collect and return the first samples of lunar soil in 45 years.

This was done in collaboration with the European Space Agency who provided tracking information for the Chinese spaceship.

Chang’e-6 will be the first mission to explore the south pole of the Moon and is expected to launch in 2023 or 2024.

Chang’e-7 will study the land surface, composition, space environment in an overall mission, according to the Chinese space authority, while Chang’e-8 will focus on technical surface analysis.

China is also reportedly working on building a lunar base using 3D printing technology and sending a future crewed mission to the surface.

Mission number eight will likely lay the groundwork for this as it strives to verify the technology earmarked for the project.

The CNSA is also building an Earth-orbiting space station where Chinese astronauts will conduct scientific experiments, similar to the crew of the ISS.

The agency also launched a mission to Mars in summer 2020 and landed a rover on the red planet in May 2021.

China is also said to be working on a project to build a solar power generator in space, that would beam energy back to Earth and becoming the largest man made object in orbit.

They also have a number of ambitious space science projects including satellites to hunt for signs of gravitational waves and Earth observation spacecrafts to monitor climate change.