NSW's Deputy Premier John Barilaro says sections of the Kosciuszko National Park should be free of feral horses and overall numbers should be cut to as low as 600, a dramatic shift from his previous positions.

“We must reduce the number of brumbies, whether it’s down to 600, 1000, or 3000," Mr Barilaro told the Herald, adding that “there are parts of the park that should have zero horses". 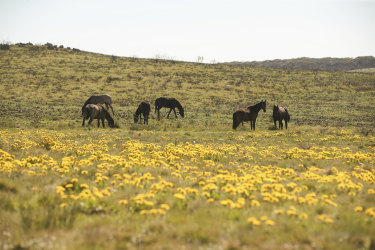 Feral horses at Long Plain near Kiandra, from last November. The latest count suggests numbers in the park may have fallen although researchers say they remain unsustainably high for the delicate alpine ecosystems of the Kosciuszko National Park.Credit:Alex Ellinghausen

Mr Barilaro made the comments ahead of the release of the government's latest count of horses in the park. "We’ve seen a lot of brumbies lost to drought and bushfires," he said.

The latest spring survey, obtained by the Herald, show the numbers of the animals totalled more than 14,000 compared with 19,000 a year earlier. Environment Minister Matt Kean attributed the drop to effects of bushfire and drought, movement of animals out of the park, and a smaller survey region.

"I remain 100 per cent committed to managing the very sensitive areas of the iconic Kosciuszko National Park on the basis of the best available science," Mr Kean said.

“We will always have wild horses in Kosci, but 14,000 is still too many. If we want to preserve this precious place and the plants and animals that call it home, we need to manage horse numbers responsibly."

Mr Kean agreed to an annual horse count after pressure from Mr Barilaro, who said the previous tally had been too high and that fires and drought had savaged herds, reducing the urgency to reduce numbers.

Mr Barilaro said the lower numbers showed "we were justified in our push for an urgent recount of the wild horses in the park". 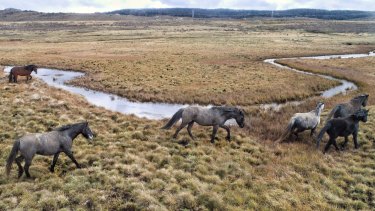 Feral horses damaging the waterways along the Eucumbene River north of Kiandra. This photo was taken in July 2020.Credit:Nick Moir

"I'm pleased that we're finally dealing in facts and we can now get on with finding the right balance as we promised," he said.

Andrew Cox, head of the Invasive Species Council, though, said Mr Barilaro's comments accepting that numbers may need to drop to as low as 600 were "extraordinary" compared with his past views.

Mr Cox noted, for instance's Mr Barilaro's comments to ABC radio last March when he said: "[Scientists] have a target of 600 over 20 years, well I don’t support that. That was the whole reason the Brumby Bill [to protect the horses] came into play, against the original Plan of Management".

Jamie Pittock, a professor at the Australian National University, said the difficulties of conducting aerial surveys meant it was not certain that the true number of horses had dropped.

The report shows a possible range of horses in the 2673 square-kilometres survey region of between 8798 and 22,555 animals. It noted horse densities in the northern region of the park that largely escaped last summer's fires were "not significantly different" from the 2019 estimate for the area.

"That's the area where there's a particularly high density of threatened species," Professor Pittock said, with the northern corroboree frog, stocky galaxias fish and alpine sheoak skink among them. "It only takes a small number of horses to do irreparable damage."

The Herald sought comment from a pro-brumbies advocate Peter Cochran.

Our Morning Edition newsletter is a curated guid to the most important and interesting stories, analysis and insights. Sign up here.