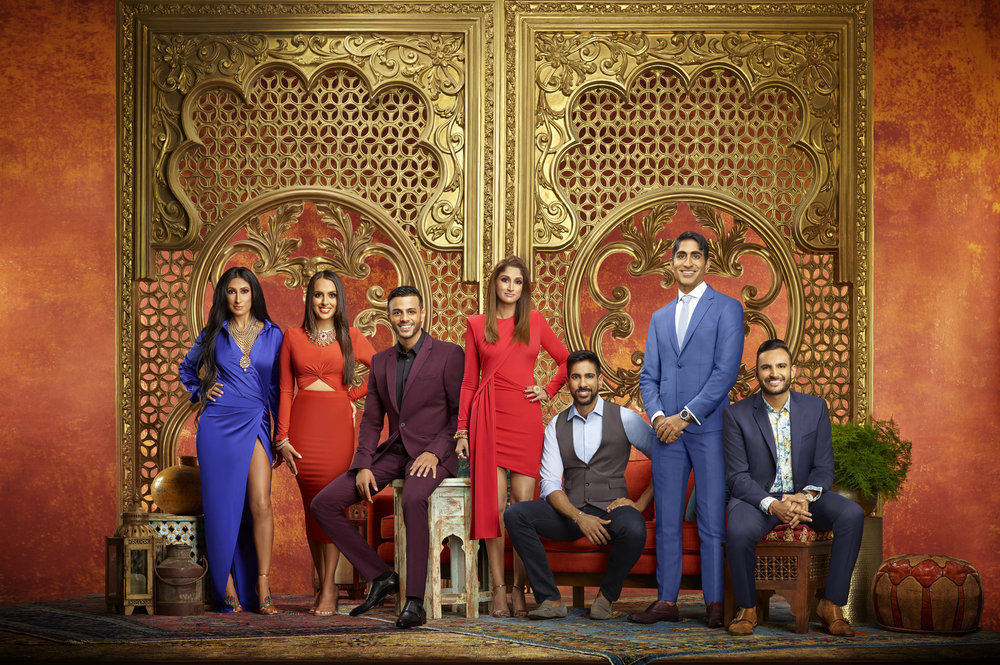 In its ongoing attempt to catalog the pugilism of every ethnic group on earth — Italians, Persians, Mexicans, rich white women, and people who live on boats — Bravo has tapped into a new niche market with Family Karma, the first US reality show to feature an all-Indian cast. According to press materials, the show, which premiered yesterday, gives viewers “a never-before-seen look inside the intriguing lives of seven young Indian-American friends,” all of whom live in Miami and have known each other since they were all kids. For a lot of Indians outside of India, it’s a familiar setup: Your parents were friends, so naturally you’re forced to be friends with each other too.

The core cast includes Anisha, 34, who just moved home to start her own business, Monica, 27, whose parents are divorced (which is only a big deal if you come from a community where divorce is somehow worse than a lifetime of wedded misery), Amrit, 32, whose plotline thus far is just that he’s gay, Vishal, 32, whose greatest flaw (according to his future mother-in-law) is that he tried to be an actor once, and Brian, who has just now decided, at 27, that maybe dating brown women is something he should consider. Then there’s the wild card in the form of Bali — Bali Aunty, depending on how old you are — who’s 44, twice divorced, a single mom, and hot as shit.

The show, or at least the two episodes made available to critics, focuses largely on the younger generation in these families. Vishal’s girlfriend’s mom doesn’t like him, Brian needs to get his BMW blessed, and Anisha’s 34-year-old eggs are, according to her mother, molting inside her body. But I think I speak for nearly anyone who’s going to watch this show, but in particular for the other brown people who are going to watch this show when I say: No one gives a shit about these kids. The producers of Family Karma are missing out on the real juice that could take this show from passively fine to deliciously idiotic and watchable — they should just focus on the aunties.

Much has been written and sold about the power of the South Asian aunty. She’s helpful and nurturing, but bossy and intrusive. All of my aunties have been a discomfiting combination of the above — they feed me until I burst and then criticize my weight; when I was in my early twenties, they wanted me to get married but tattled to my mother if they saw me with a boy; one of my aunties flew across the country just to see what I was wearing while in college and then repeated the information to my mother, which led to at least two years of them not speaking. (My cousin and I continued to talk regardless of this, for we were amateurs.) Aunties are petty, fiendish people who have long been ignored in the reality show market despite being perfect for it. Has anyone been better designed for getting in a fight at an ostentatious wedding than my mother??? I mean, I love fighting just as much as the next ladki, but only with time and age will I reach my Amma’s potential.

But please, take it from me, a woman who is currently fighting with six to seven of my mom’s cousins without even knowing it: The best fights in an Indian family are instigated by the aunties. It’s not the cousins who tend to get into scraps; it’s your mom, her sister, her “sister” (don’t ask about specifics on how everyone is related — you will get slapped so hard with a flyswatter your entire life will flash before your eyes), and her friend, all going to the function and smiling at each other until you get back in the car and on the way home your mom spends the whole time telling your dad how everyone’s saris looked like they were pleated in the dark. That, somehow, erupts into something bigger. And then, at the next function, passive-aggressive jabs are thrown, which leads to a real fight and, just like that, 15 years pass without any of them speaking to each other. Then one day they run into each other at someone’s Sangeet and bygones are bygones, until the next time.

There is always a next time.

So for Family Karma to limit the show to the younger generation is a perfectly good waste of a bunch of sixtysomethings, the ones who actually have money and experience shame, thereby forcing them into strange arguments about honor and dignity and grace. How do Indians get this way in the first place? We learn it from our parents, watching them get into needless tiffs about whose cooking is the worst, whose daughter has too many piercings, whose son is stuck in arrested development.

The best parts of Family Karma — when it’s not presenting a laughable stereotype of Indians, including a flash of what appears to be Lakshmi in the opening credits, but she’s so nondescript that I can’t be sure — are the fights between the moms. Vishal’s future mother-in-law, Lopa Aunty, is an absolute ghoul who drinks and yells, and you just fuckin’ know she’s one of those women who uses the word “wheatish” to describe her complexion without an ounce of irony. Vishal’s mother appears to constantly be on the brink of tears whenever anyone criticizes her son, who looks like a man made of clay, slowly melting in the hot Miami sun. In the second episode, she walks out of a confessional when the producer asks her simple questions about her fight with her son’s girlfriend’s mother. “Can I ask you a question?” she says to the producer. “I don’t want to talk about her anymore.”

This is not a question. Aunties don’t ask questions. Questions suggest the person they’re talking to has any control over the outcome of that situation. 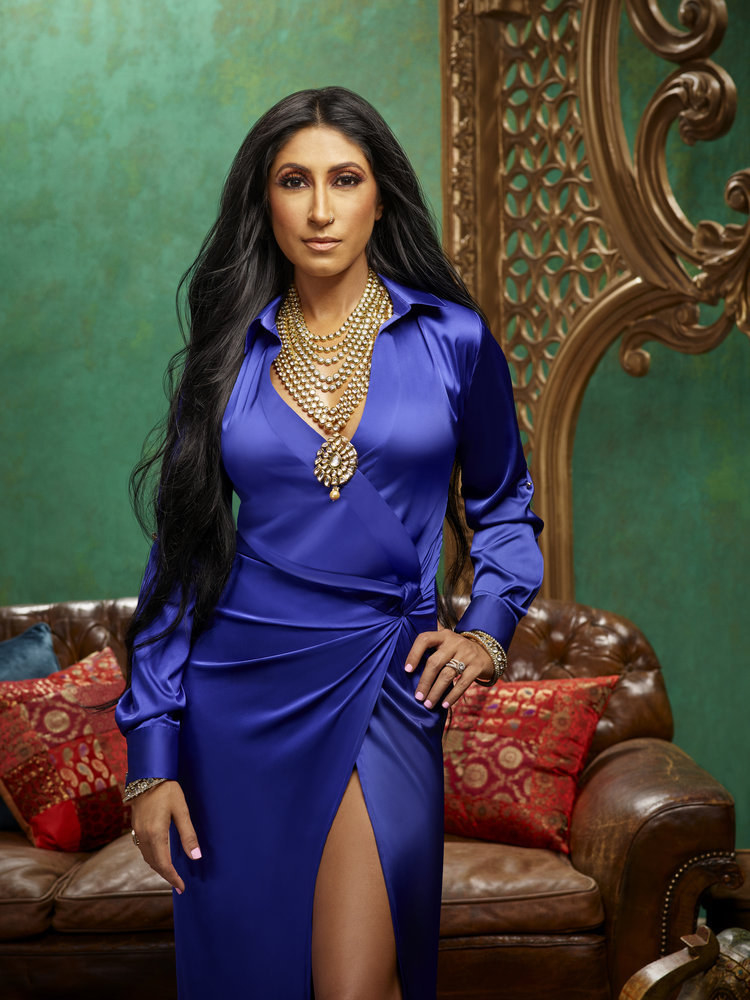 Bali, though she lives in some nebulous zone between the kids and the adults, is an aunty herself, considering the fact she’s raising a teenager. Her tits are always out, she has 8 miles of long black hair; in her confessionals, she’s swirling around a glass of white wine, and in her first appearance on the show, both of her shoes break at a restaurant. I am deeply, deeply obsessed with her, primarily because I had an aunty like this myself when I was younger. She wore jeans to dinner parties with big, brass buckles and silver jewelry (“Chandelier earrings,” my mother would mutter to herself after we got home, her eyebrows so far up her forehead that they were merging with her hairline), and she had chunky caramel highlights. I loved her so much. I never wanted her to be my mother, because she always made me feel a little unsafe — but god, what I would’ve given to have smoked my first cigarette with her.

Hopefully Family Karma will adjust to find who the real heroes and villains of the show are. It’s not Brian, who talks about wanting to find the Jasmine to his Aladdin and is then promptly corrected by a producer who reminds him that Jasmine is Arab. It certainly isn’t Monica, who maybe has a crush on Brian. Even Bali Aunty becomes infinitely more interesting when placed with the mothers of the group than when she’s with their thirtysomething children. Let’s focus on Anisha’s grandfather, who pulls aside one of the Indian producers to aggressively ask her why she hasn’t had children in the first year of her marriage. Or, alternatively, Anisha’s mother, who screams at her that she doesn’t want her daughter to “become an old maid with gray pubic hair.”

After all, why waste time with an amateur who’s only beginning to learn how to be insufferable when you have an entire generation right there, ready to fight, stubborn as hell, and wearing jhumkas bigger than you could possibly imagine? For once in my life — and I’ll never say this twice — I have to admit the obvious: It’s important to give your elders the respect they’re owed. ●