Home » Lifestyle » Barrier Reef doomed as up to 99% of coral at risk, report finds

The Great Barrier Reef is all but doomed, with between 70 and 99 per cent of corals set for destruction unless immediate “transformative action” is taken to reverse global warming, according to a new report.

The Australian Academy of Science says the more ambitious target of the Paris Climate Agreement of keeping global warming to 1.5 degrees has now slipped out of reach and is “virtually impossible”. 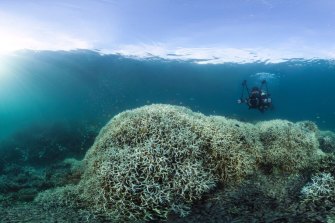 Coral bleaching near Lizard Island on the Great Barrier Reef during 2016.Credit:EarthJustice, EJA

“Limiting the temperature rise to the lower Paris Agreement target is exceedingly difficult, and with only three or four more years of emissions at current levels remaining, the target has become virtually impossible to achieve,” says The Risks to Australia of a 3C Warmer World.

If 1.5 degrees of warming was sustained, the Great Barrier Reef would cease to exist as we know it, says one of the authors, Ove Hoegh-Guldberg, a biologist and climate scientist specialising in coral reefs.

If warming was stabilised, surviving corals suited to warmer temperatures may eventually return to cover the reef. Should it continue unabated, corals would vanish entirely to be replaced by other organisms such as seaweeds and bacteria, said Professor Hoegh-Guldberg.

“It’s questionable that this would produce the $5 billion in income the reef now produces in tourism,” he said.

Another of the authors, Distinguished Professor Lesley Hughes of Macquarie University, said at current rates of emissions the world is likely to burn through its 1.5 degree “carbon budget” by 2025.

According to the report, the earth has already warmed by 1.1 degrees since the beginning of the industrial era.

However, warming does not impact on the world uniformly and, according to Professor Hughes, Australia is already experiencing 1.4 degrees warming.

“The observations that we are seeing of things like unprecedented bushfires and regular frequent bleaching of the Great Barrier Reef are consistent with the predictions that have been made previously about a 1.5-degree world,” she said.

“This is already a difficult world and really the main point of the academy report was to show that if you think this is difficult, then imagine double or triple the warming that we’ve had.”

In this scenario Black Summer fires would likely be an annual event and one in a 100-year floods would happen more commonly.

Professor Hoegh-Guldberg said it would be “disastrous” for politicians and policymakers to consider the report an excuse for giving up on reducing emissions.

Rather, he said it was further evidence that governments needed to shift from “gradualism to transformative action”. This meant committing not only to net zero targets by 2050, but substantial annual cuts guided by a significant reductions target for 2030.

Professor Frank Jotzo, another contributor to the paper and director of the Australian National University’s Centre for Climate Economics and Policy, said he agreed 1.5 degrees was likely out of reach, but serious and immediate action could still see the world stabilise at between 1.5 and 2 degrees, which would make a huge difference to the quality of life on earth.

According to Professor Jotzo the unprecedented growth of wind and solar power over the past few years showed not only that the world has the technology to replace fossils with clean energy, but the energy produced will be cheaper than for traditional fossil sources such as oil and gas.

As a result we can afford to spend on storage technologies such as batteries and pumped hydro, he said.

At the Paris Climate Conference in 2016 Australia signed up to the agreement to keep global warming below 2 degrees and as close to 1.5 degrees as possible. At the time Australia committed to reduce its emissions by 26-28 per cent based on 2005 levels by 2030. The agreement included a so-called ratchet mechanism designed to encourage nations to raise their targets.

Over the past year the number of countries with targets of net zero by mid-century has leapt from about 25 per cent to 75 per cent.

Now, pressure is mounting on countries to make 2030 targets more ambitious. Professor Jotzo said he believes that the US, which is hosting a climate summit of 40 world leaders this month, will probably double its 2030 target by around 50 per cent, increasing pressure on Australia to significantly raise its target.

“The only pathway for all countries to get to net zero is by getting low emissions technologies to commercial parity with existing alternatives,” the spokesman said.

“When developing countries are no longer forced to choose between growth and decarbonisation, then global emissions will fall.

“Australia has strong targets, an enviable track record, and a responsible plan to get the cost of low emissions technologies down.”