Even though school, footy training and social meet-ups may be a bit uncertain as rolling lockdowns continue, footy fans can get a quick fix of drills and coaching thanks to a new collaboration between Google and the AFL.

Footy Skills Lab, a free web app that features video tips from players and uses AI to track performance and gives scores, is live today and can be used by anyone with a phone, a ball and an internet connection.

Google has teamed up the AFL to create the Footy Skills Lab.

“It’s a great tool to use to add an edge, particularly for kids who are learning,” said AFLW star Tayla Harris, who’s featured in the app.

“I really like the idea of them being able to refine their skills and play games just with their phone and the footy, they don’t necessarily need anyone else.”

Also featured are Madison Prespakis, Akec Makur Chuot and AFL Wheelchair player Joanna Argaet. The app features ball handling, decision making and power (kicking and passing) drills at three intensity levels, and is designed to be as accessible as possible for people with movement, sight or hearing difficulties. 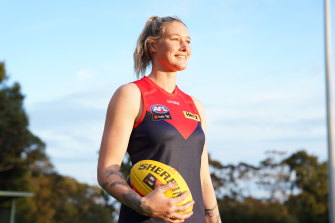 Melbourne’s Tayla Harris is one of the Athletes featured in the new web app.Credit:Ben Gibson/Melbourne FC

Dave Bowman, who leads Google’s Partner Innovation team, said inclusion was a key part of the app from the start.

“We’ve tried to embrace accessibility options beyond just closed captioning and audio options. So there are options, like if you’re in a wheelchair, to be able to do the drills in a slightly different way,” he said.

“We’re trying to replicate the best experience for any given footy fan, really.”

Users need to open the web page and prop their phone up to begin a session. The app uses the phone’s camera to track the ball, although Google says it doesn’t collect any footage and all the AI processing is done on the device itself.

Exercises include doing as many figure eights through your legs with the ball as possible in a given time, or jogging on the spot while paying attention to text or audio cues that tell you to move position, bounce or kick. At the end users are given a score, which they can share to challenge friends or family.

The machine learning program used to identify and track the ball was trained using Google’s open source TensorFlow platform, and should work with any football you have lying around.

“A huge part of what we’ve been doing over the last few months has been actually just trying to train it to recognise different balls,” Bowman said.

“When we started we were thinking about that classic red footy, but then very quickly were realised oh there’s a yellow one, that one’s scuffed after someone kicked it down the road, there’s one with mud on it. Every family with a footy will have a different one.”

Get news and reviews on technology, gadgets and gaming in our Technology newsletter every Friday. Sign up here.

Most Viewed in Technology