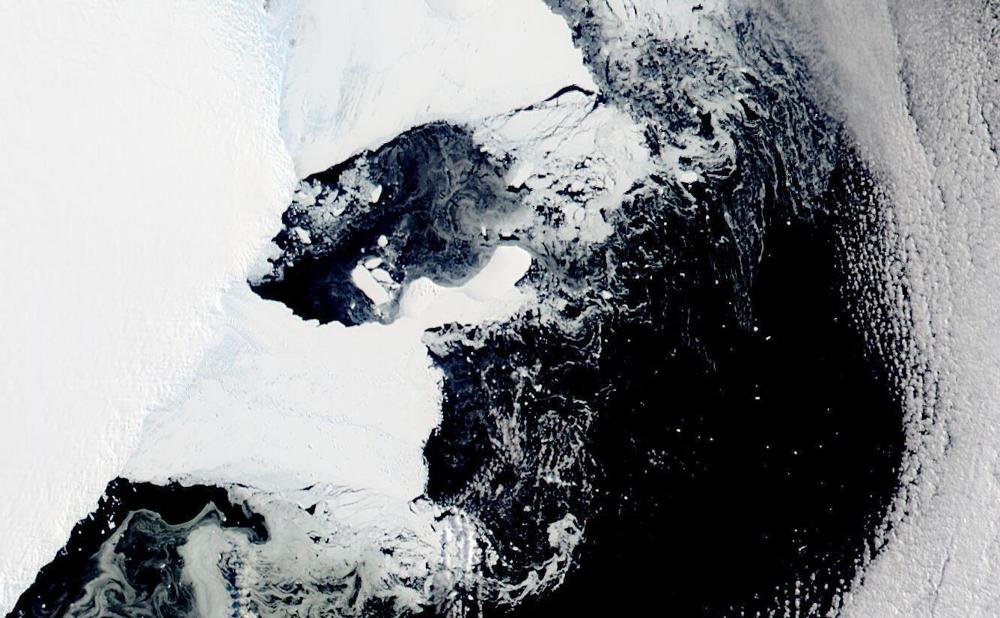 The effects of global warming are starting to happen in real time as satellite imagery captured the collapse of a large ice shelf in East Antarctica this month.

The Conger ice shelf that collapsed into the ocean was around 1,200 square kilometers, making it only a little smaller than the whole of London.

The collapse of the ice shelf which held the Conger and Glenzer glaciers from the warmer water, captured by satellite images, marked the first time in human history that the frigid region of East Antarctica had an ice shelf collapse.

Catherine Walker, an Earth and planetary scientist at the Woods Hole Oceanographic Institute and Nasa, tweeted satellite imagery obtained by the Landsat and MODIS satellites on Thursday.

The GIF shared by Walker  shows the shelf slowly recede leading up to 14 March and then the next image, from 16 March, shows it completely fractured.

Walker said scientists have never seen this happen in this part of the continent, making it worrisome.

‘We need to know how stable each one of the ice shelves are because once one disappears some of that water will come to San Diego and elsewhere,’ she said.

Scientists had been seeing this particular ice shelf — closest to Australia — shrink a bit since the 1970s and then in 2020, the shelf’s ice loss sped up to losing about half of itself every month or so.

‘We probably are seeing the result of a lot of long time increased ocean warming there,’ said Walker.

Still, one expert thinks that only part of East Antarctica is a concern.

‘Most of East Antarctica is relatively secure, relatively invulnerable and there are sectors in it that are vulnerable,’ British Antarctic Survey geophysicist Rob Larter told AP.

‘The overall effect of climate change around East Antarctica is it’s chipping away at the edges of the ice sheets in some places, but it’s actually adding more snow to the middle,’ said Larter.

Antarctica is divided into East and West Antarctica, with the Transantarctic Mountain Range separating the two halves. In West Antarctica, the ice is more unstable than in the east, so melting ice and collapsing ice shelves are often observed.