Purrfect timing! Amusing photos of animals were taken at just the right time – from two cats cuddling to a VERY baffled goose

Animals do the funniest things – and these amateur photographers caught them in the act just in time.

Pet lovers from all over the world have taken to sharing their amusing snaps to the Facebook group Important Animal Images.

From cats and dogs to frogs, goats and iguanas, some of the best shots have been collated in a gallery by Bored Panda.

In one snap, a pair of cats are seen embracing each other on a windowsill like an old married couple, while another sees a congregation of felines enjoying an episode of Tom and Jerry on a laptop. 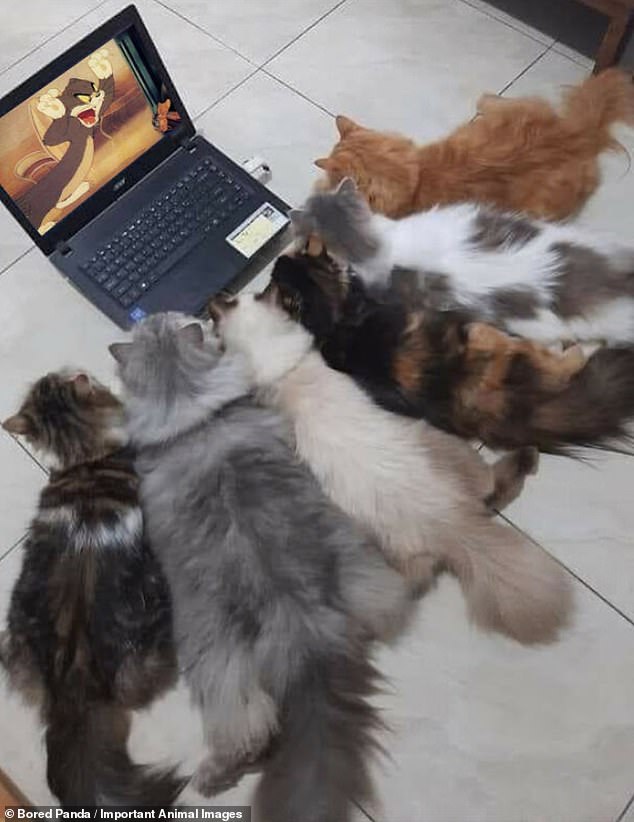 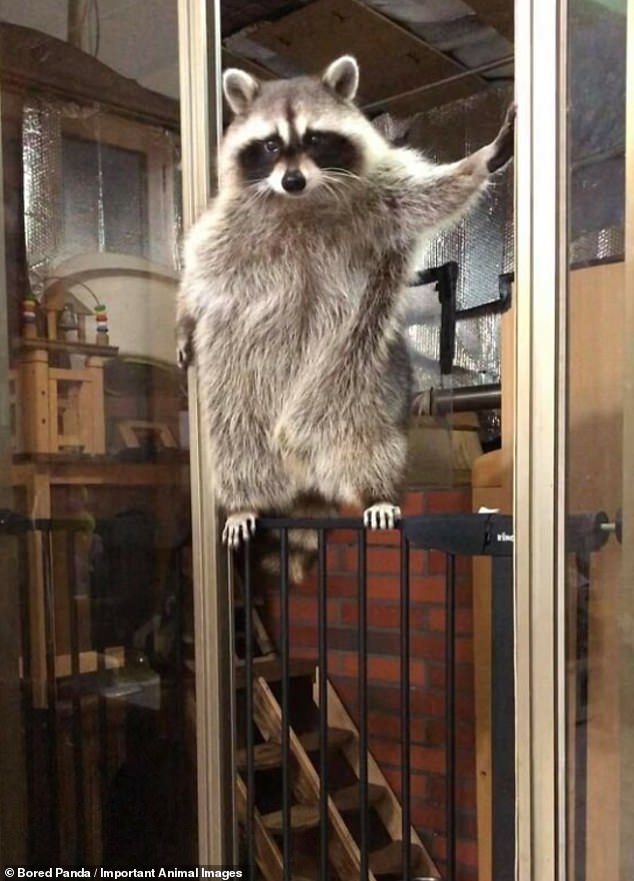 ‘Hello neighbour!’ One person caught a friendly raccoon standing on their balcony fence and holding on to their window 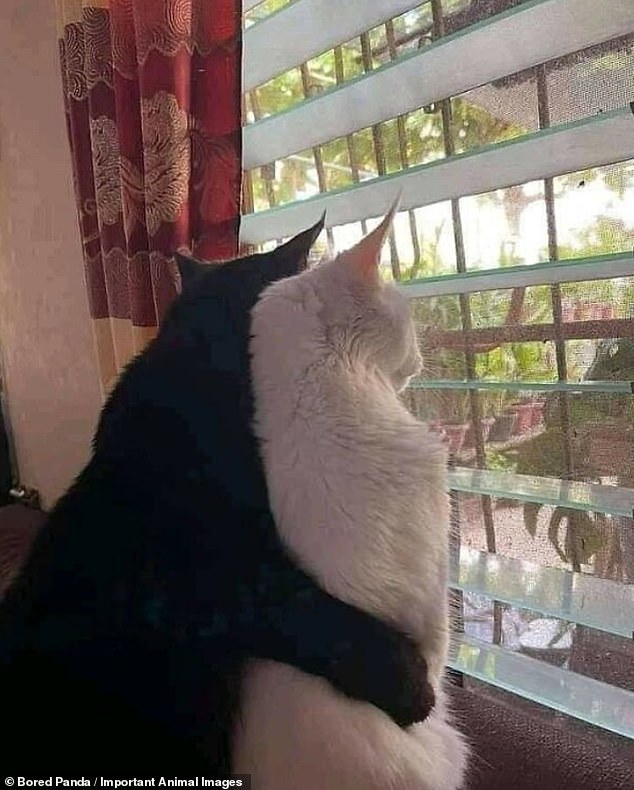 These black and white cats looked like an old couple as they cuddled up by the window, looking out at the garden 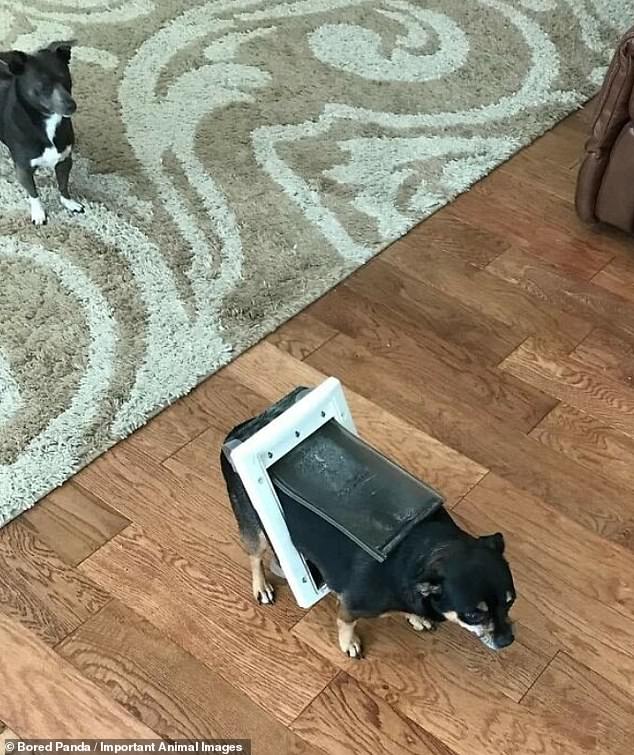 Oops! A sheepish pup who had put on a few pounds broke their owner’s dog flap and walked around the house with it stuck on their bottom 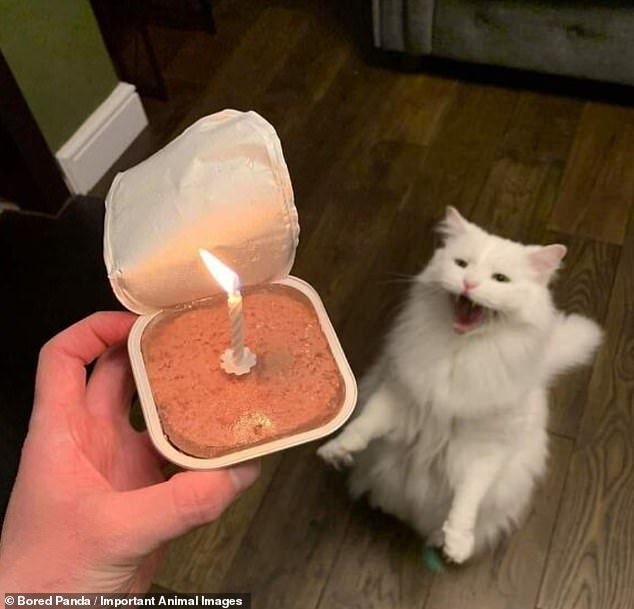 Happy birthday! This white cat looked genuinely excited to receive their special dinner with a candle on their big day 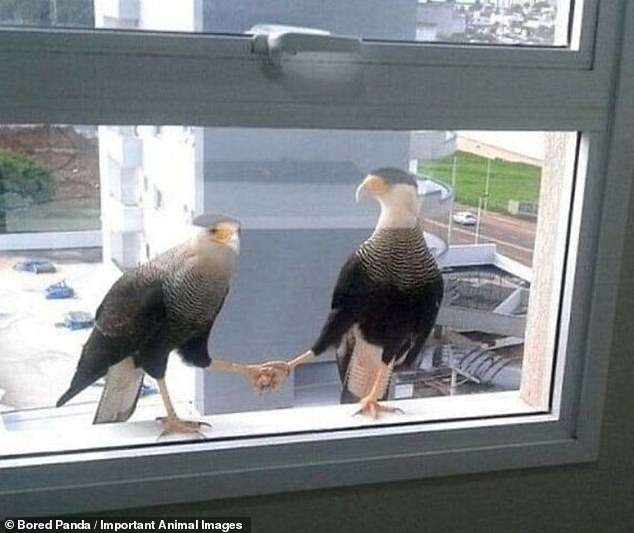 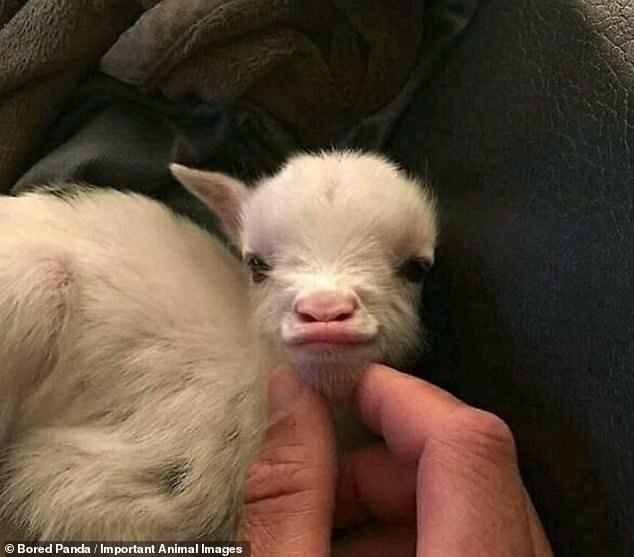 You’ve got to be kidding! This baby goat showed off its best pout during a cuddling session with their owner 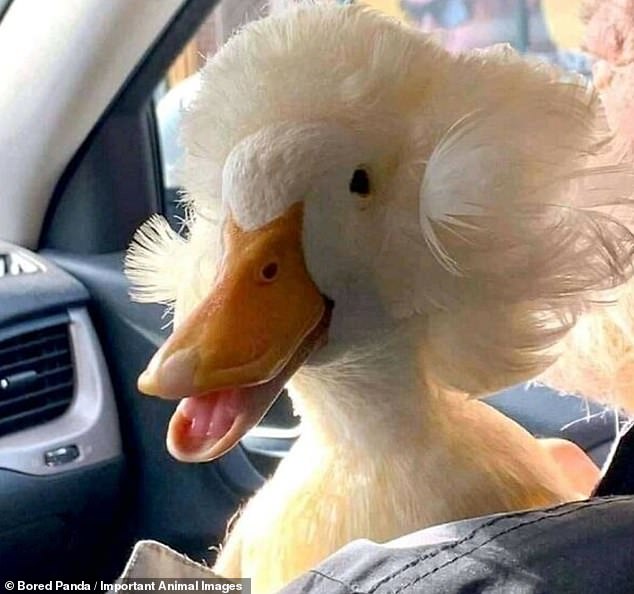 A blow-dry like no other! This white duck had its feathers ruffled during a car journey with their owner 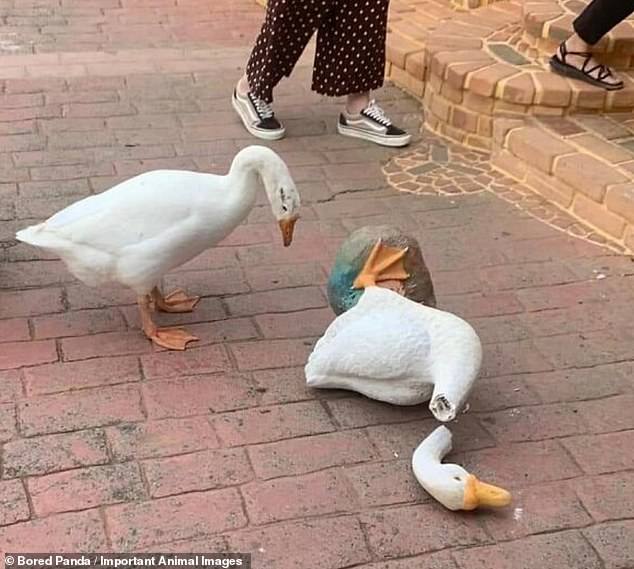 A geese tragedy! A white goose looked distraught after it came across a broken bird sculpture on the street 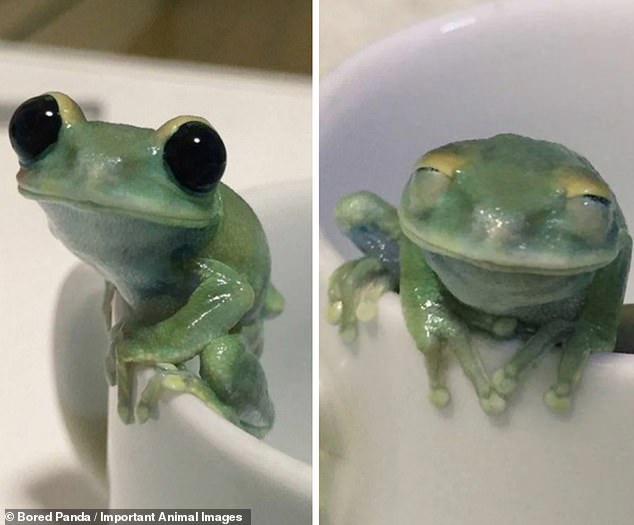 Pond-ering life: This happy frog was caught beaming as it perched itself on their owner’s mug for some bonding time 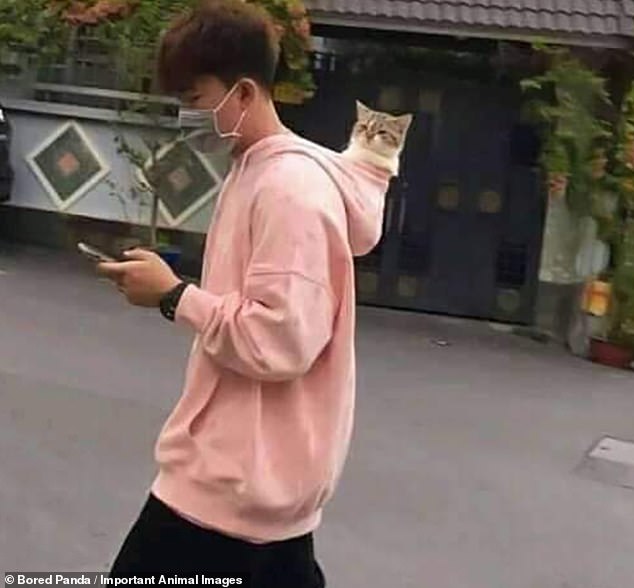 Cat-ching a ride! A clever pet owner who didn’t want to be far from their cat started bundling it up in their hoodie 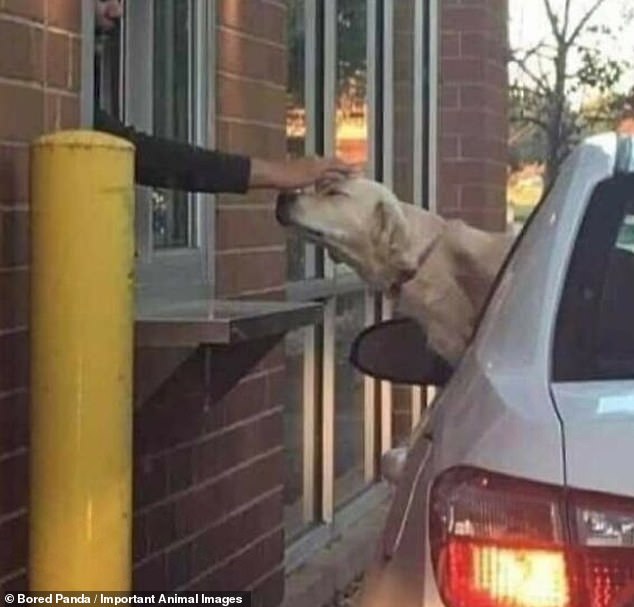 Happy meal! A friendly labrador was caught requesting some pats while his owner got their food from the drive-thru 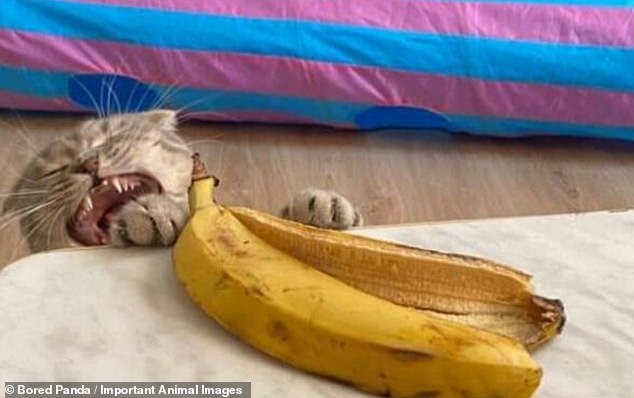 Not impressed! A curious cat found out he really didn’t like banana in this hilarious picture snapped by their owner 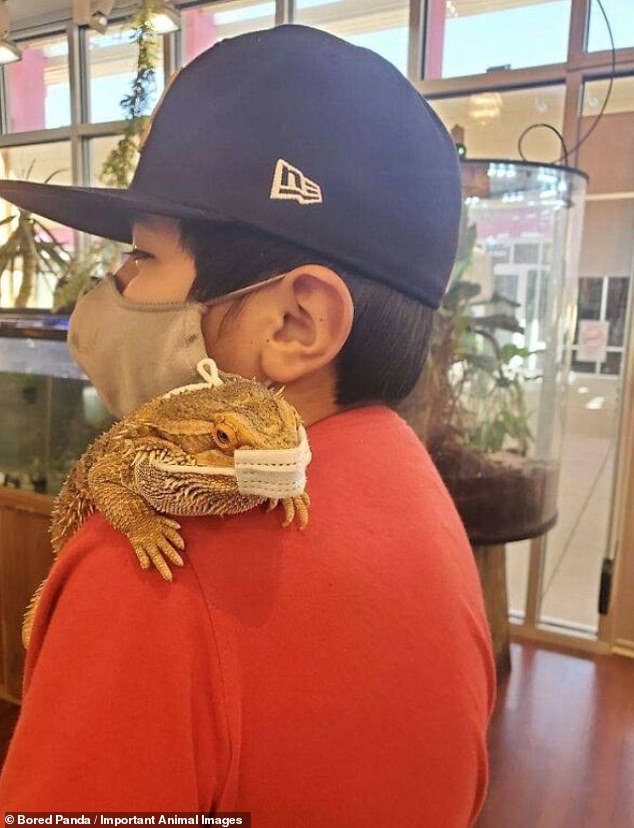 Safety first! A child wearing a face mask has made a mini version for his pet iguana who modelled it while resting on his shoulder