Amanda Lohrey admits she is hopelessly impractical. So there’s an irony that she frequently writes about making or building things. At the heart of The Labyrinth, the Tasmanian writer’s seventh novel, lies the creation of one of those “constructs that is over 50,000 years old and found in most cultures”.

Today, she has been awarded Australia’s most significant literary prize, the $60,000 Miles Franklin, for this spare tale of a woman coming to grips with the losses, absences and sense of guilt in her life.

“My husband calls it the Wimbledon of literary awards. It’s just an honour (to win). There’s something nice about being associated with Miles Franklin; she was such a larrikin, such a nonconformist,” Lohrey said. 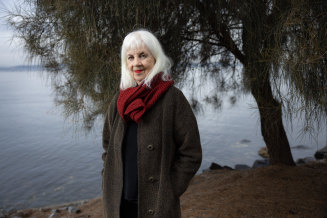 The other books on the shortlist were: Amnesty, Aravind Adiga; The Rain Heron, Robbie Arnott; At the Edge of the Solid World, Daniel Davis Wood; Lucky’s, Andrew Pippos; and The Inland Sea, Madeleine Watts.

The chair of the judging panel, NSW State Librarian Richard Neville, said the novel was elegiac and soaked in sadness. “It is a beautifully written reflection on the conflicts between parents and children, men and women, and the value and purpose of creative work.”

Lohrey, who lives on Tasmania’s east coast, published her first novel, The Morality of Gentlemen, in 1984. Her third was the prize-winning Camille’s Bread, which was shortlisted for the Miles Franklin, while her short-story collection, Reading Madame Bovary, won a Queensland Premier’s Award. In 2012, she won the Patrick White Award, set up by Australia’s Nobel literature laureate to honour a writer whose work had been under recognised.

In The Labyrinth, Erica Marsden has moved to the coastal township of Garra Nalla (the setting for Lohrey’s fifth novel, Vertigo). Those missing from her life are the mother who deserted her when she was 10, a son serving a lengthy time in a nearby jail for homicidal negligence whose father abandoned the family when he was a baby, and an estranged brother.

Gradually, Erica hatches an idea to fill her time and perhaps heal her feeling of “undefined lack” – she will build a labyrinth by her isolated home. Lohrey says the Swiss psychologist Carl Jung had a view that the hands had intelligence that could solve a mystery that the intellect struggled with.

Erica encounters an eccentric Balkan stonemason, an illegal immigrant, who is camping nearby. Together, they embark on the project, with the occasional assistance from a motley crew of locals. The Labyrinth is melancholy, moving, and ultimately uplifting.

Lohrey’s interest in labyrinths was piqued a few years ago when she noted there was a resurgence in their building, here and particularly in the US. She found that when asked about their labyrinths, many people couldn’t articulate why they had built them.

“Or quite commonly, they wanted a walking meditation. I have a long-standing interest in Australia as a secular culture that nevertheless tries to find its own sacred spaces in its own way.

“But I wanted an image of creativity, of making … the creating and making as a way of dealing with whatever problems we have. It seemed to be the ideal image for that. A labyrinth is not a puzzle – not like a maze. You go in, you go into the centre, you reflect on the self and theoretically you come out from a mini-pilgrimage and you resolve something.”

The shape of the labyrinth — the idea of it as a “model of reversible identity” — also informed the form of the book.

“It’s one thing to write well page for page but it’s another thing to find a satisfying form where the whole thing seems to come together.″⁣

Lohrey takes her time with her writing and spent five years on The Labyrinth. But there was a period when writing stalled and the ANU gave her a timely three-month fellowship.

“I had this very bare room with nothing in it and it was just like being a monk and it was perfect because I could go into a kind of zone, which in fact is not unlike being in a labyrinth.

“It’s one thing to write well page for page but it’s another thing to find a satisfying form where the whole thing seems to come together. That’s what you slog away trying to arrive at. You don’t know what it’s going to look like. You know it when you see it or write it.”

Although Lohrey has written non-fiction, notably two Quarterly Essays, she remains committed to writing and reading fiction. It’s something to do with mystery.

“It’s so fascinating to not know where you’re going and then when you get to the end think ‘so that’s what I was doing’. It’s really like a child in a playpen with a set of blocks, both serious and playful at the same time and it’s inherently paradoxical in that you have a plan, you have schema, and then all that dissolves and you go somewhere else. A new scheme or form emerges … it’s addictive.”

Fiction will take a reader into that special space, she says, and you occupy it at no cost. And somehow you’re renewed and refreshed by it.

She is, of course, working on another novel. And it will be short, as is her way. “I keep coming back to this idea of how we live in space, the way we manage space, the way we orient ourselves.” Readers, watch this space.