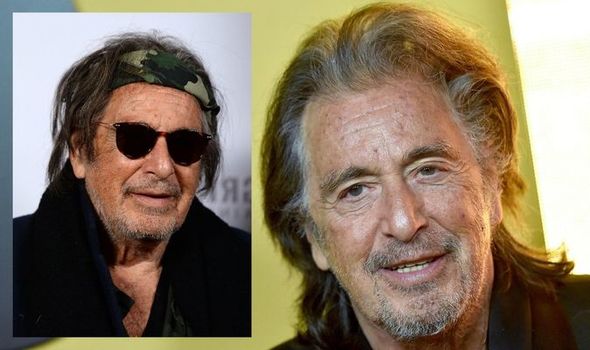 The Godfather was Pacino’s breakout role, earning him nominations at both the Oscars and Golden Globes. Yet it was finishing the film and being thrown into the limelight that caused Pacino’s mental health to deteriorate. The struggling young actor was told at the time by director and actor Lee Strasberg to simply “adjust to his new life”, but Pacino himself confessed it is not that simple.

Speaking on The Hollywood Reporter’s Awards Chatter Podcast Pacino said: “I went through some stuff. I had therapy five days a week for 25 years.”

When starring in The Godfather II the actor was able to identify that his character Michael Corleone was depressed.

This was the same when he starred in a film called The Humbling where his character – an ageing actor has an affair with a younger woman.

Initially attracted to the role because of the character’s “tragic fall” he continued to say: “The character is getting older and the feelings he has for his work are becoming less available to him, so he tries to compensate and becomes a little off and confused and slips into a kind of depression that expresses itself in his work.”

Although the actor admitted that he has struggled in the past, speaking more recently he also counts himself “lucky” and “spared” not to have suffered like some of his fellow actors sadly did and still do.

At the Venice Film Festival he said: “I may be depressed but I don’t know about it.

“People go into depression and it’s very, very sad and it can last and it’s terrifying.

“I know that, I’ve had bouts with stuff that comes close to that, but not with that intensity. I feel spared, I feel lucky.”

The mental health of actors became a cause of concern after the sad death of Robin Williams who committed suicide in 2014.

In the 1980s Pacino tried to reduce his workload, only appearing in a select few films. Talking about the time away from the camera he said: “It was good for me. I enjoyed it. But then, as it happens, the money runs out.”

According to the World Health Organisation it is estimated that five percent of adults across the globe suffer from depression. That’s around 280 million people in the world.

The condition is a leading cause of disability worldwide and can lead to suicide.

Although it is one of the most common mental health conditions the majority of people who suffer from it do not receive any treatment.

The NHS recognises that at some point in their life, everyone will experience some form of depression, but it is when the condition takes over your life and stops you from doing day-to-day activities that it becomes a problem.

Depression can result from a combination of factors including adverse life events or stress. There are also correlations between depression and physical health. For example, cardiovascular disease can lead to depression.

The NHS detail that the psychological symptoms of depression include the following:

In addition physical symptoms include:

The condition can also affect individuals socially, for example, avoiding contact with friends or neglecting hobbies and interests.

When diagnosed with the condition, doctors will describe how severe it is. This can differ from mild depression to moderate and then severe. The most severe form of depression where it is almost impossible to get through your daily life.

If you are worried about your or someone you know’s mental health it is advised to talk to a GP as soon as possible. The Samaritans are available to talk 24 hours a day seven days a week on 116 123, if someone is struggling with suicidal thoughts.