“Lord of Rings” star Ian McKellen, 81, received a coronavirus vaccine on Wednesday, becoming one of the first celebrities to get the shot.

“I am feeling so happy and relieved and optimistic and everything that I haven’t been really feeling for a long time now,” he told reporters. “I couldn’t be happier.” 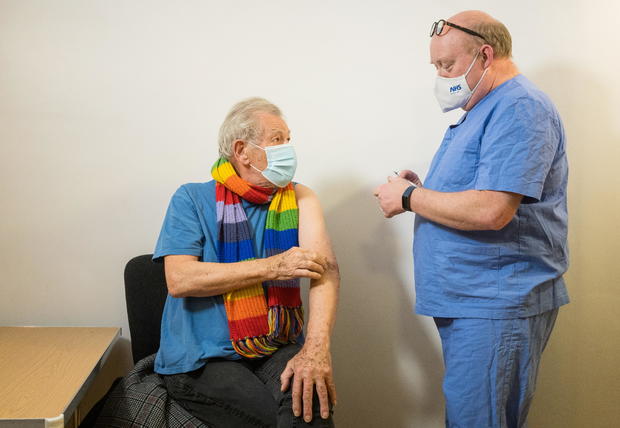 The British actor was given the recently approved Pfizer-BioNTech vaccine at London’s Queen Mary’s Hospital. Despite getting the shot, he intends to keep wearing a mask.

“I’ll carry on wearing the mask and social distancing and all that, but it does mean that I can imagine going back to work and mixing with people and because I’ll be rather safe, I feel very special and it’s a very happy day this, I’m a bit euphoric, actually.”

McKellen will be back for a second dose of the vaccine in three weeks and encouraged others to get it.

“I would have no hesitation in recommending it to anyone,” McKellen later posted on Facebook.  “I feel very lucky to have had the vaccine.”

He added that, “anyone who has lived as long as I have is alive because they have had previous vaccinations.”

It’s a very special day, Anyone who has lived as long as I have is alive because they have had previous vaccinations,…

The first 800,000 doses of the Pfizer vaccine in the U.K. are going to people over 80 who are either hospitalized or already have outpatient appointments scheduled, along with nursing home workers. Others will have to wait their turn, but all vaccinations will be provided free of charge via Britain’s National Health Service.

Meanwhile in the U.S., Pfizer’s COVID-19 vaccine is now being distributed across the country, ushering in the biggest vaccination effort in the nation’s history.