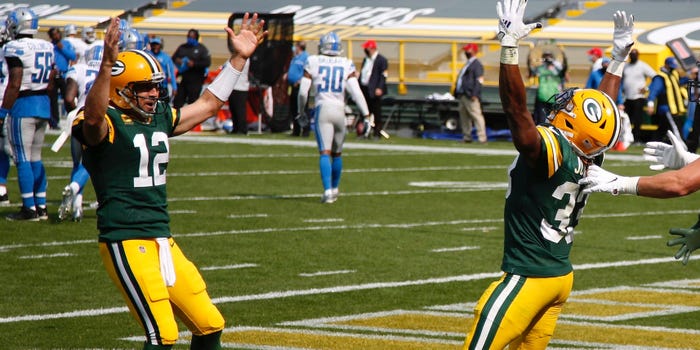 Aaron Rodgers and the Green Bay Packers have found an unlikely source of camaraderie this season: the 2002 film "Austin Powers in Goldmember."

Over the course of the season, Rodgers has explained on "The Pat McAfee Show" how the Packers have a love for the movie that has translated to the field. Rodgers said it was inspired by offensive coordinator Nathaniel Hackett's love of the film.

For instance, the Packers have been calling the red zone the "gold zone."

After touchdowns, Rodgers and his teammates yell, "I love gold!" in reference to the movie.

Rodgers could be heard yelling the line after running in a touchdown this season.

With Rodgers having thrown 39 touchdowns on the season, and the Packers scoring 50 touchdowns in total, that's a lot of gold celebrations.

Rodgers and the Packers' tributes to Goldmember have gotten some attention during game broadcasts. He told McAfee after Week 13 that the team's goal is to get Mike Myers to get in front of the team in character.

"We want Mike Myers in Green Bay," Rodgers said. "We want him in Green Bay, as Goldmember, whether it's in the team room on Fridays to introduce the gold zone presentation, whether it's a video we can get from him, whether it's a Saturday night speech from him. As Goldmember, as Austin Powers, as Fat Bastard, whoever he wants to be … We are big fans of Goldmember and Mike Myers, and if he wanted to show up, there'd be no one happier than Nathaniel Hackett, first of all, but we'd all be really excited."

Rodgers then told McAfee on Tuesday, after Week 14, that he might have to make a special call to get Myers exempt from COVID-19 protocols to enter the Packers building.

"We're still shouting out Mike Myers; we'd love to get him in," Rodgers said. "I was told after I talked about it on this amazing show, about Mike Myers, that he might have to get some COVID tests to be let in the building. So I might need to call on the NFL for some special exemptions for him. If we get him masked up in a gold mask, I feel like there's no excuses why he couldn't be in there."

It's unclear if Myers is aware of the invitation. But if the Packers do get him in…

"We could get him in the building, get him on some roller skates, and let him go f—ing crazy," Rodgers said.