Experts are baffled at a goose in China laying eggs with strange black yolk inside them.

Photos and videos of the strange eggs have been doing the rounds on social media since they were posted last week.

According to a man from Hangzhou City, in China’s Zhejiang Province, the eggs came from a normal grey goose.

The man claimed on Chinese social media site Weibo the goose eggs came from a friend’s farm. He said he had been gifted eggs from this farm before that had been perfectly normal.

However, when he cracked open these regular-looking goose eggs, the yolk came out dark grey, almost black rather than yellow or orange.

In a video the man, named Zhu explained that the egg had all been laid by the same goose and they looked and smelled normal. 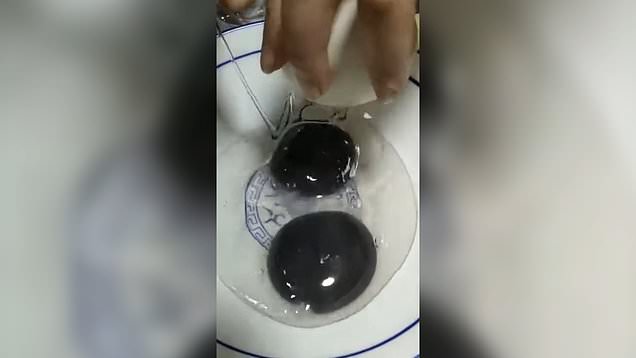 Neither he, nor the goose’s owner could explain what had turned the yolks black.

As the images began to circulate, some people began to come up with theories. Including that the goose may have eaten a lot of black mulberries, with a high melonin content.

But Zhu dismissed this theory, writing: ‘These geese are all raised freely. When mulberries fall to the ground, they run to eat them. They contain melanin, so it may also be caused by eating too much mulberry, but this explanation is not particularly reasonable, so I am not sure, in short, it is quite strange.’

Chinese media picked up the strange case of the black yolks and put them to a poultry expert who admitted the only thing he could think of was environmental pollution had somehow affected the colour of the eggs.

But he said even this explanation is tenuous, adding: ‘scientifically speaking, such a phenomenon should not occur’.

Apparently, China’s Academy of Agricultural Sciences are interested in getting involved but for now, the mystery continues.