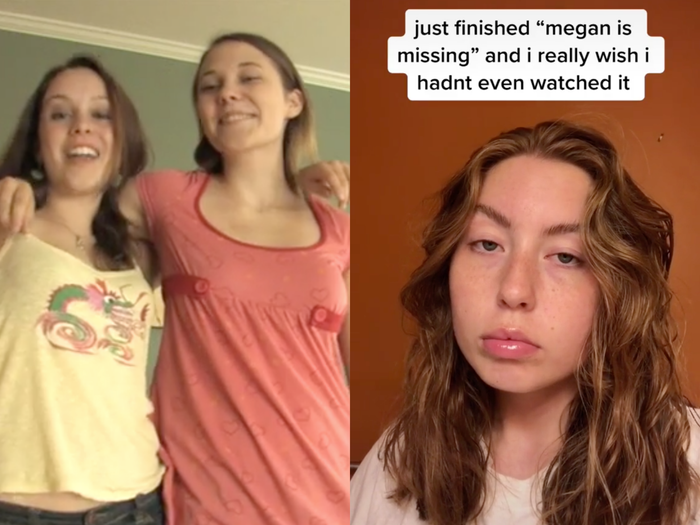 The 2011 horror film "Megan is Missing" is TikTok's newest pop-culture fixation, and people who watch the film are calling it "traumatizing" or saying that they "couldn't even finish it."

The film, which was written, directed, edited, and co-produced by Michael Goi, was made in a found-footage style that follows the abduction of a teenage girl, Megan. The controversial film has drawn criticism in the past for its violence and sexualization of its adolescent protagonists, and as Entertainment Weekly reported, was banned in New Zealand.

Now, people on TikTok are re-living the viewing experience and posting their reactions on the app. The hashtag #meganismissing has over 83 million views.

please watch this film at your own risk. It is something i will never watch again . i am forever traumatized. ##meganismissing ##OnHold ##BeKind ##fyp

It's not quite clear why "Megan is Missing" is going through a renaissance in 2020, but it's not unusual for cultural artifacts from decades past to become popular on TikTok, which is favored by Gen Z.

"Megan is Missing" takes place in the days leading up to the abduction of teenager Megan Stewart (Rachel Quinn), and follows her friend Amy (Amber Perkins) as she investigates Megan's disappearance. The film is focused on the danger of anonymous online chatting — Megan disappears after chatting with a man named Josh who claims to be a 17-year-old, says that he can't show his face because his webcam is broken, and fails to show up at a party where he and Megan were supposed to meet.

The film, set in 2007, was picked up by distributor Anchor Bay and released in 2011. While the story it tells is fictional, it was marketed as being based on true events and was endorsed by Marc Klaas, whose 12-year-old daughter was kidnapped and killed in 1993, the Guardian reported. Director Michael Goi said in an interview with Indie Film Nation that he "wanted to do a movie about this subject" and that he thought it was important to "get the word out about it."

Many of the videos in the #meganismissing tag on TikTok were posted within the past several days, and it appears that the film exploded on the app over the weekend of November 13. However, people had posted about the movie and their reactions to it before its biggest surge in November, with the film coming up as part of film recommendation series or in reaction videos. In early October, some users were already posting about how wished they hadn't watched it.

Now, people on TikTok are posting their reactions to the film or making videos about how they felt after watching it. Many are calling the film "traumatizing," and using the slowed and pitched down version of "Rät" by Penelope Scott in their posts. "Oh you're so traumatized it makes me wanna cry," Scott sings in the song.

tik tok made me do it ##meganismissing ##documentary ##caution if you must watch, know you’ve been warned.

A slowed, pitched-down version of Gotye's 2011 song "Somebody That I Used To Know" also soundtracks many of the videos.

"I got a text from Amber Perkins, the lead actress in my movie, that it was exploding on TikTok at the moment, and I didn't get to give you the customary warnings that I used to give people before they watched 'Megan is Missing,' which are: do not watch the movie in the middle of the night, do not watch the movie alone, and if you see the words 'Photo Number One' pop up on your screen, you have about four seconds to shut off the movie if you're already kind of freaking out before you start seeing things that maybe you don't want to see," Goi says in a video that now has approximately 1.5 million likes.

"Apologies to those who are already posting about how the movie has freaked them out, but fair warning to those of you who are still contemplating watching the film," he says.

If you want to watch "Megan is Missing," you can rent it on Amazon Prime, YouTube, and Google Play — just do so with Goi's warnings in mind.