With the holidays comes "proposal season."

And this year, women are going to great lengths to get that symbolic engagement ring. Or at least that’s what a joint report from Wedding Wire and Betches Brides is saying with its limited survey.

The two lifestyle publications’ "#DropAHint Study" consulted a sample of more than 500 women in relationships about how they are letting their partner know they are ready for marriage.

One in 3 women admitted they plan to drop hints to their partner to encourage a marriage proposal, which may include discussing the types of rings they like or sharing wedding-related Pinterest boards or TikTok videos.

WOMAN SMACKS BOYFRIEND ON THE HEAD DURING DISNEYLAND PROPOSAL, SAYS SHE THOUGHT HE WAS 'TROLLING'

The most popular engagement hint women are dropping is focused on their coveted, prospective ring, the study says. Fifty-five percent claim they dropped hints about styles and settings while 51% dropped hints about stone cuts. Other qualifiers that were deemed important included ring size (48%), color (39%) and what they strongly disliked in a ring (38%). 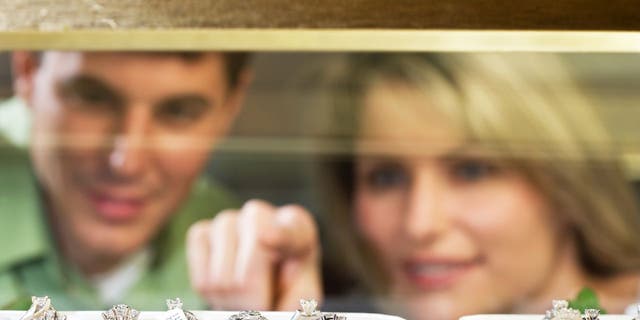 Some aspiring brides-to-be care a great deal about what their prospective engagement rings will look like, according to WeddingWire and Betches Brides. (iStock)

Twenty percent of the women surveyed for the study said they have already dropped hints about their ring preferences versus the 21% who plan to do so before they get engaged. One-quarter of respondents were more direct and outright told their partner what they want or sent photos showing their ideal ring.

"We've seen that many of our audience members aren't shy when it comes to letting their partners know exactly what type of rings they want and when they want to get engaged," said Betches’ CEO and Co-founder Aleen Kuperman-Dreksler, in a statement.

Other women have gone on to drop hints about their dream proposal, according to the joint study.

Fourteen percent of the women surveyed said they know "exactly and how and where they want their proposal to take place" while 6% said they want a "partnership proposal" where both loved ones pop the question.

Moreover, 35% of the engaged couples involved in this study said they discussed proposal preferences beforehand.