Star Trek icon William Shatner has blasted off into space on Blue Origin’s New Shepard rocket, with a send-off from Jeff Bezos himself.

Wednesday saw New Shepard take off carrying four astronauts, Dr. Chris Boshuizen, Glen de Vries, Audrey Powers, as well as actor Shatner, to space and back on a suborbital flight. They were joined by Amazon and Blue Origin founder Bezos as they prepared to head on board.

Originally set to take off at 3pm BST (around 9am local time), Shatner’s flight eventually took off around 3.50pm BST, and saw him become the oldest person to head to space.

Before the flight, which took off from the Texas desert, Shatner was seen ringing the bell as he walked onto the gantry before being strapped into the rocket alongside his crew.

From T-minus two minutes, the rocket took control of itself autonomously and the gantry retracted, with the engines engaging and blasting the craft towards the atmosphere.

They hit zero-G and space at 351,000 feet altitude, in which they experienced several minutes of weightlessness as well as a spectacular view of our planet.

As the crew communicated with mission control they were good to go, Shatner was seen being closed into the aircraft by Bezos, who was on hand to see off the second human flight for the rocket. 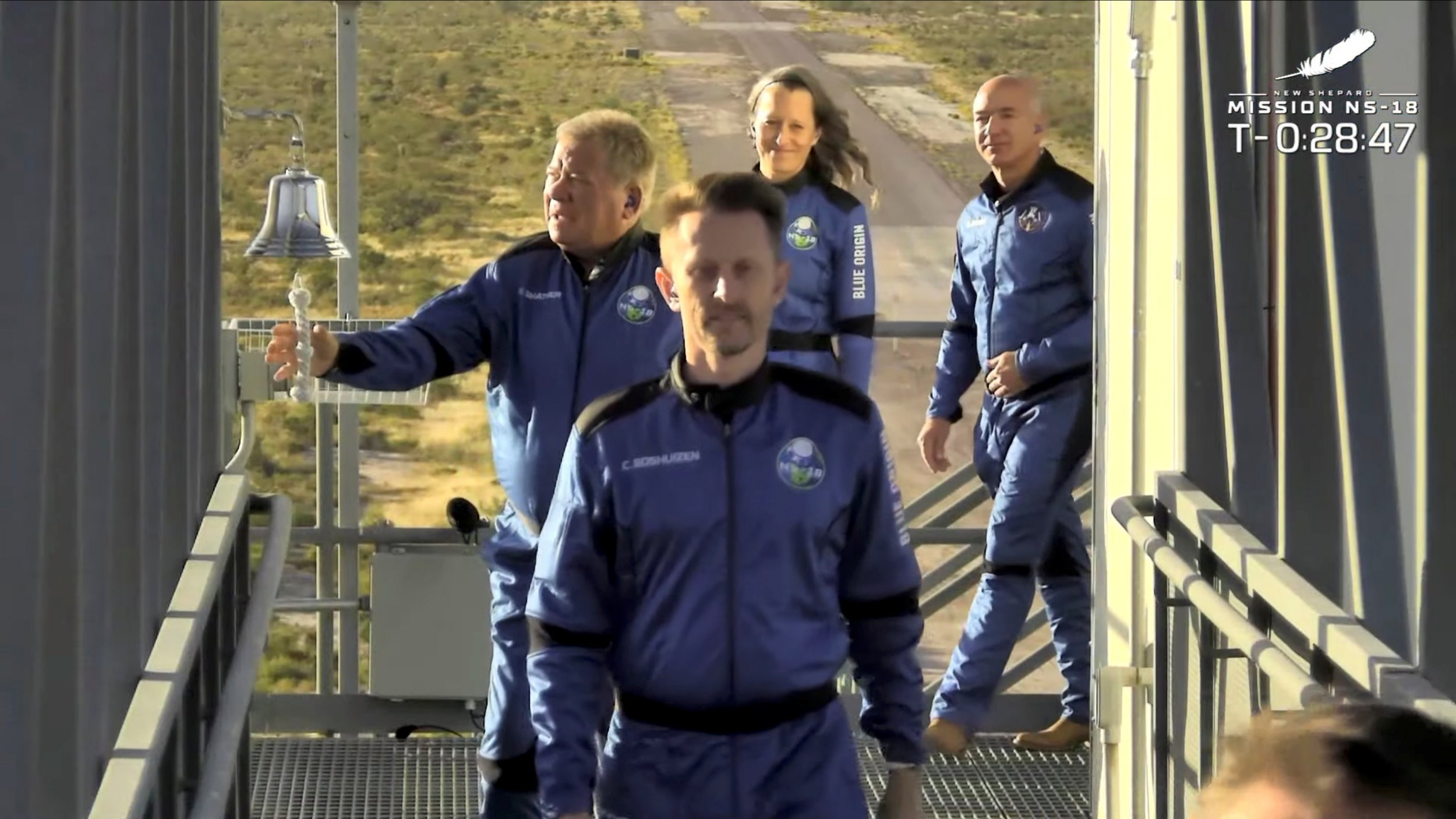 Mark Bezos, the Amazon billionaire’s brother who flew on the first human flight of New Shepard, told the crew as they prepared to take off: ‘You lucky bastards. It was only 10 weeks ago that I was sitting where you are, watching the countdown clock full of anticipation and excitement. Eager to feel a rumble of liftoff and the magesty of weightlessness.

‘The depth of my desire to fly again is hard to express.’

After a little more than 10 minutes, New Shepard’s capsule holding the crew touched down back on Earth.

The flight was scheduled to take off on October 12, but was pushed back a day.

A statement said: ‘Due to forecasted winds on Tuesday 12 October, Blue Origin’s mission operations team has made the decision to delay the launch of NS-18 and is now targeting Wednesday 13 October.’

Ahead of today’s flight, Shatner and his fellow crew members posed in their astronaut suits, as they prepared for Wednesday’s big launch.

He was also pictured being shown the spacecraft, undergoing training, and sharing a message about the epic journey on a postcard as he took part in Blue Origin’s Club for the Future program for aspiring astronauts.

William’s handwritten message read: ‘This is the most important and practical concept for space use and for aiding in saving planet Earth.’

He previously admitted he was feeling a ‘fire of terror’ ahead of the flight.

Shatner jokingly added at a New York Comic Con panel: ‘I’m terrified. I’m Captain Kirk, and I’m terrified going to space. You know, I’m not really terrified. Yes I am. It comes and goes like a summer cold.’

He followed the likes of billionaires Richard Branson and Bezos, who both recently completed trips into space on their respective ships.