Home » The Truth About Chandler And Joey’s Relationship On Friends 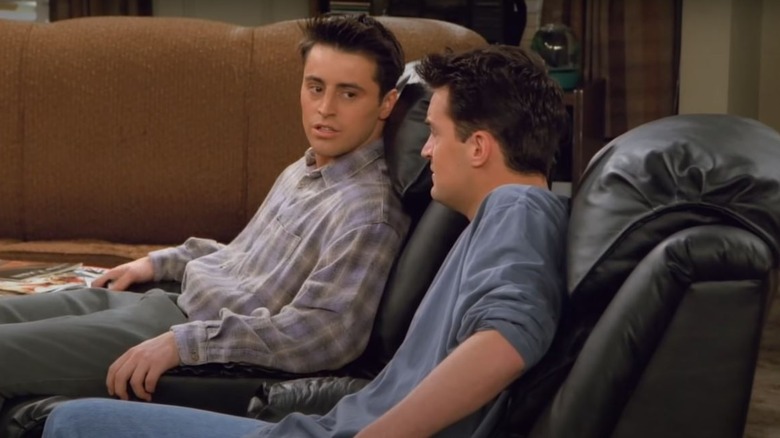 “Friends” fans can’t help but love the loyal and sweet friendship that developed between BFFs Chandler Bing (Matthew Perry) and Joey Tribbiani (Matt LeBlanc) over the course of the show’s 10-season run. The duo delivered a ton of laughs, tears, and heartfelt moments for viewers to enjoy as they walked through life together and (almost) always had each other’s backs through the ups and downs (via Screen Rant).

The pair were more than just roommates, they were brothers (and also parents to their chick and duck, per HelloGiggles). They lived together for many years in the apartment across from Monica (Courteney Cox) and Rachel (Jennifer Aniston). Chandler often encouraged Joey throughout his acting career and cheered for him when he got his big breaks on “Days of Our Lives” and in his World War II film. For his part, Joey supported everything that Chandler did, and even helped him hide his secret romance with Monica from the rest of the gang — which is why he was chosen to officiate the couple’s wedding years later.

Chandler and Joey were often on different pages financially in their lives. During the series, it was revealed that Chandler often paid the bills in the pair’s apartment. It was also said that he lent Joey money for things like headshots, leaving Joey to pick Chandler as the person he wanted by his side at his very first movie premiere. Of course, there were low moments throughout their friendship as well. 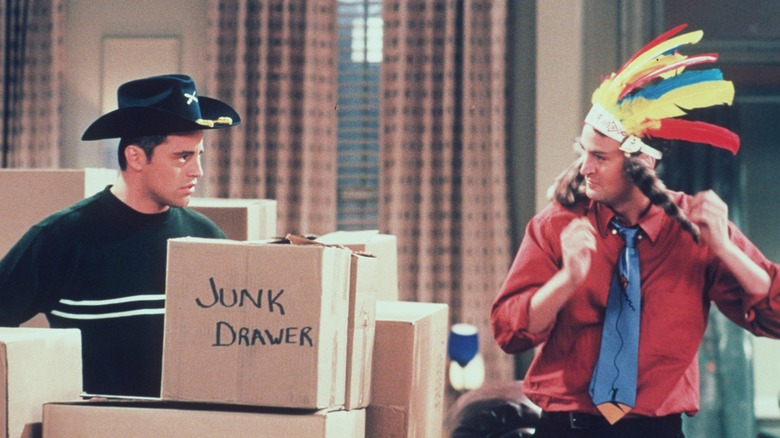 Throughout any friendship, there are bound to be hiccups, and that happened on more than one occasion between “Friends” besties Joey and Chandler (via Screen Rant). During the 10 seasons, the pals suffered through some low points in their relationship such as the time that Chandler fell in love with Joey’s girlfriend, Kathy, and kissed her while the two were still dating. However, after the argument was resolved, Joey sweetly gave Chandler his blessing to pursue a relationship with Kathy. Chandler also mocked a heartfelt gift that Joey gave him out of deep appreciation for his love and support, and we can’t forget the time that Chandler fell asleep during Joey’s movie premiere.

However, Joey made mistakes in the friendship as well. He once opted to move out of his shared apartment with Chandler, which put a strain on their relationship. However, the two missed each other too much to live apart, and Joey ended up moving back into the apartment after a few short weeks. During one hilarious moment, Joey was tricked by a man whom he invited into their apartment. The man pulled a fast one on Joey and ended up stealing all of the guys’ belongings, forcing them to use lawn furniture in their living room. Despite it all, Joey and Chandler never questioned their love for each other and it was an obvious theme in many of the episodes. While the rest of the gang shared a deep bond, Joey and Chandler’s friendship takes the crown as the show’s most solid friendship.