Ree Drummond has the sweetest spin on ravioli in her chocolate dessert recipe. Best of all, The Pioneer Woman star’s fried dessert ravioli uses a store-bought ingredient that makes it a quick treat.

Drummond demonstrated how to make the sweet treat on an episode of The Pioneer Woman. “I’m going to make dessert ravioli,” she explained as she made the filling. “All it is is ricotta mixed with chocolate hazelnut spread and a little bit of powdered sugar.”

She added, “Kind of an unusual combination, isn’t it?”

After placing a spoonful of the filling in the center of each wonton wrapper, Drummond used her finger to spread on a beaten egg around the edge of each. “And this is going to act as the glue with the wonton wrapper,” she explained. She added a second wonton wrapper to the top and pressed the edges together. “You basically want this to be sealed together for the rest of eternity.”

Drummond added, “Or until you eat the ravioli.” 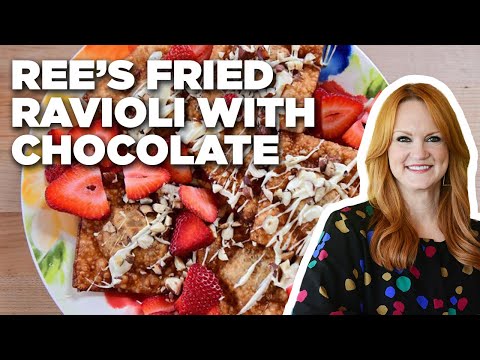 Once she built all of the dessert ravioli, she added them into a pan with heated vegetable oil. “They are going to take no time at all to cook,” she explained.

She flipped each ravioli over when it was golden brown then carefully removed them from the hot oil and placed them on a plate. “I love how the wonton wrappers get kind of bubbly when they fry,” The Pioneer Woman star said.

Drummond melted white chocolate in a bowl set over a pan of simmering water and spooned it over the top of the dessert. “My goal is to drizzle, kind of back and forth,” she explained. “It’s a mess but that’s what we’re all about here. We’re about delicious messes.”

The Pioneer Woman star scattered chopped hazelnuts over the top of the ravioli, noting, “You can do pecans, walnuts, anything you want. But how fun are these? And that chocolate ricotta mixture in the center — I know is just going to be soft and ooey gooey.”

Finally, she scattered sliced strawberries around the plate. “I think this turned out just beautifully,” Drummond said. “Did you know pasta could be dessert?”

The full recipe is available on the Food Network website.

Drummond uses the easy shortcut when she makes more traditional ravioli as well. “I love all kinds of pasta, but there’s something about good ravioli that really makes my heart go pitter-pat,” she wrote in a 2011 blog post on The Pioneer Woman website.

She continued, “I love the flat area of pasta around the filling itself and I love it when the fork finally cuts into whatever the filling happens to be.”

Drummond shared that “truly homemade ravioli is to die for,” but her quick shortcut will do in a pinch. “If you want to whip up the next best thing, wonton wrappers really are a remarkably good substitute — especially if you want to experiment with different toppings and make a variety,” she wrote.

She has three different options for her recipe: cheese, arugula, and egg yolk fillings.