Now that Christian Bale is officially joining the Marvel Cinematic Universe, it’s time for fandom to go into overdrive about who the former Batman will be playing in Thor: Love and Thunder.

As the MCU continues to deliver a revolving door of A-list talents, Bale joins Thor franchise favourites like Anthony Hopkins, Rene Russo, Jeff Goldblum and Cate Blanchett. The latest photos are hot off the set of the Tom Hiddleston-led Loki and suggest that Bale’s debut will be as Dario Agger, aka Minotaur.

The first Loki set photos feature a bus with “Roxxcart Evacuation Shuttle” on the side. Photos have already shown the God of Mischief working alongside/against the TVA (Time Variance Authority), so it’s entirely plausible they all go up against the Roxxon Energy Corporation, whose CEO is… Dario Agger.

This isn’t the first time we’ve seen Roxxon in the MCU. The company logo appeared in Iron Man, Roxxon sponsored one of the Monaco Grand Prix cars in Iron Man 2 and several of its staff had minor roles in Iron Man 3. In fact, Roxxon has popped up in everything from Agents of SHIELD to Iron Fist, Daredevil, Agent Carter and Cloak and Dagger. 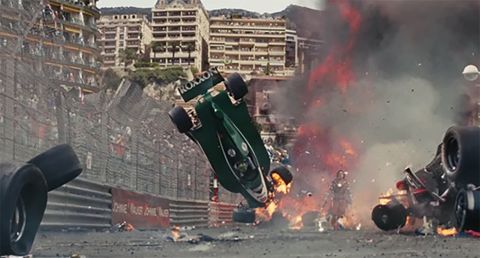 So how does this tie into Thor: Love and Thunder?

Even though Roxxon’s Iron Man Easter eggs point to a crossover with Stark Industries, it’s important to remember Agger’s comic book history with Jane Foster, who we know will take up Thor’s mantle in Love and Thunder. While the character of Minotaur is a long-standing foe in Marvel Comics, Dario Agger is a relative newcomer to the fold. Agger barged his way into Foster’s world for 2014’s Thor: God of Thunder #19 and was given a suitably out-there origin story that wouldn’t look out of place in Taika Waititi’s Ragnarok sequel.

It’s also important to note that Agger is billed as one of Foster’s biggest foes during her tenure with Mjölnir. Agger’s backstory revealed he was born into a wealthy family and embroiled in a hijack in the Aegean Sea. The young Dario escaped and swam to a nearby cave, where he made a deal with dark forces to become the Minotaur and exact revenge on his enemies with super strength and the ability to transform into a horned monster.

Back in January, rumours first surfaced that Bale would join Love and Thunder, with later reports saying it would be for a CGI performance. This led to speculation Bale would be playing the fan-favourite Beta Ray Bill, who was originally tipped to appear in Ragnarok – but Agger would be an altogether more curveball choice.

Picture the scene where Agger teams up with another formidable foe from the back catalogue of Asgardian enemies. In the comics, Agger once aligned himself with Malekith the Accursed (played by Christopher Eccleston in the MCU) and formed the Dark Council alongside Loki’s biological father. Perhaps most excitingly, Minotaur could set the stage for the introduction of the Greek Gods and major Marvel characters like Hercules and Zeus.

You know who’s got my vote. “Who Is Christian Bale Playing in THOR: LOVE AND THUNDER?” https://t.co/gIepxEvTBT pic.twitter.com/zHCCrMNl85

Even Marvel Comics’ Jason Aaron has given Minotaur the nod as the perfect character for Bale to play. Aaron worked on Thor’s 2014 comic arc and gave Minotaur his vote on Twitter. There could be more to this when considering MCU overlord Kevin Feige told fans at Comic-Con (via CNN) how Waititi reading Aaron’s comic run was what sparked Portman’s return and evolution into Mighty Thor.

We’ve already seen Bale play messed-up rich kids in American Psycho and Christopher Nolan’s Dark Knight trilogy, so at least playing Dario Agger is a role fans know he can pull off. Ultimately, the upcoming release of Loki should shed light on the situation and reveal whether the Roxxon nod is simply a well-paced Easter egg or if Agger is finally going to step from the shadows of the MCU.