Home » Celebrities » The Dixie Chicks cover Allure: ‘The politics of this band is inseparable from the music’ 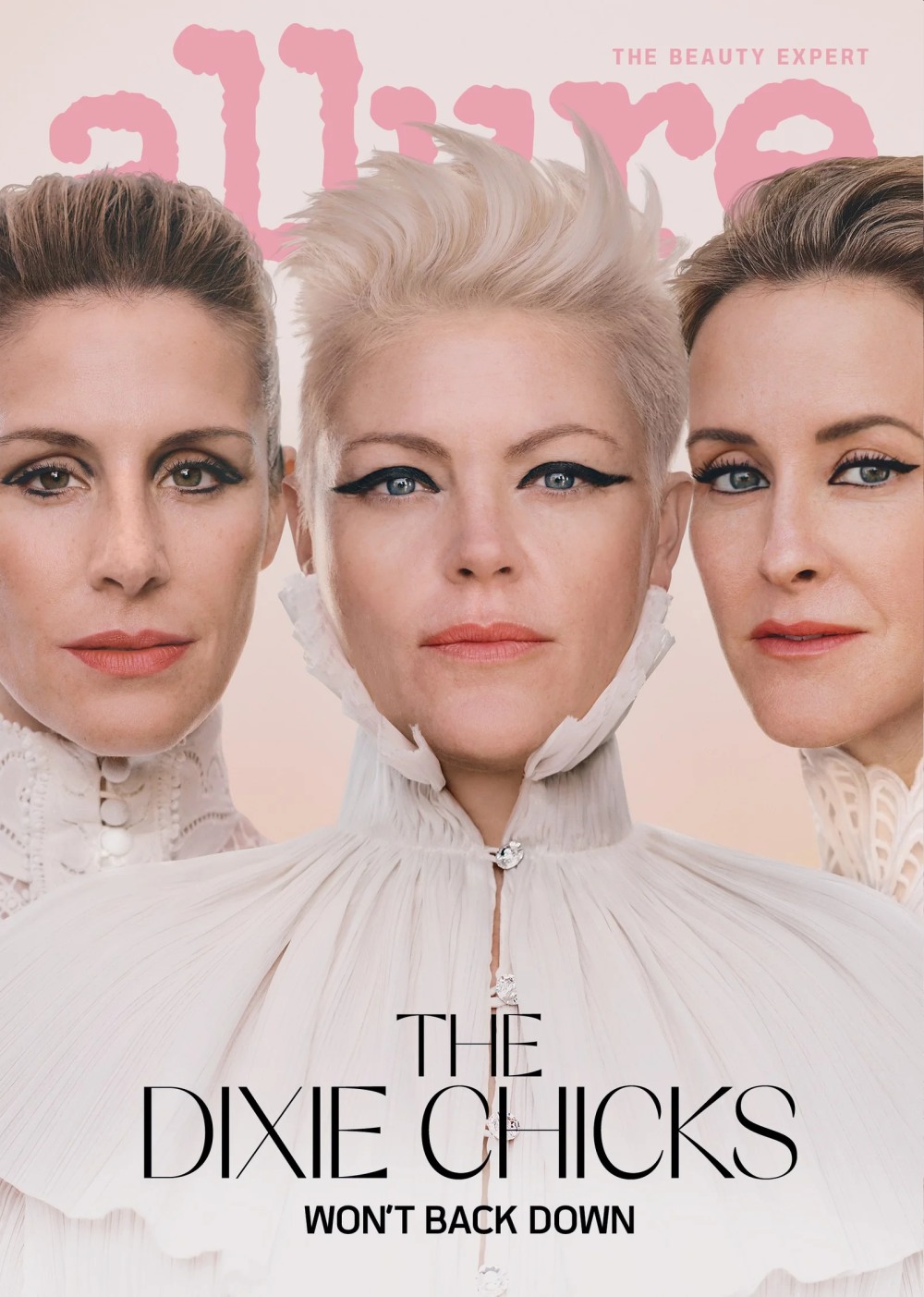 I’m sure some of the “kids” who read this blog don’t have strong memories of what went down with the Dixie Chicks in 2003. Lord, that was 17 years ago, such craziness. What happened was a very, very BIG deal and it is still something that, even now, is one of the first things Natalie Maines, Martie Maguire and Emily Strayer are asked about in interviews. What happened was that in 2003, just days before we officially “went to war” in Iraq, the Dixie Chicks were performing in London, at a small venue called Shepherd’s Bush Empire. Natalie, the lead singer, went to the microphone and told the crowd: “Just so you know, we’re on the good side with y’all. We do not want this war, this violence. And we’re ashamed the president of the United States is from Texas.”

The reaction was immediate. People broke and burned their CDs. Radio stations around the country – especially country music stations – completely banned their music. They were banned from attending and performing at most country-music awards shows. They lost thousands of fans and became a cultural/political hot potato. They’ve done interviews since then obviously, and Beyonce even brought them on the CMA stage to perform “Daddy Lessons.” It seemed like there has been some minor softening here and there. Now they’ve got a new album, new music and… they’re still the same people. You can read the full Allure cover story here. Of course they all talk about What Happened and the aftermath of it and all of that.

Why Natalie said that in 2003: “I wanted the audience to know who we were and what we were about. I do not like when artists get on their soapbox — it’s not what people are there for. They’re there to listen to your music.” At the same time: “The politics of this band is inseparable from the music.”

Strayer on their new album, Gaslighter: “I’m so proud of this album. No matter what happens with it. It might be a slow burn; it might be a quick burn. I don’t know, but it will find its way to our fans. No matter what happens with all the radio or outlets or whatever, it’ll make its way.” Maines jumps in: “I felt the most pride in our last album — maybe it was worth the controversy. It was so personal and so honest; this album even more so. Our manager was like, ‘Do you not care about a number one?’ When you have achieved all your dreams, everything else is sprinkled on top. I prefer my kids like me than having a number one record. It doesn’t mean that I won’t be grateful when it happens.”

If they knew then what they know now, would Natalie still have said that? “Oh, that’s an interesting question. I have no regrets, but the responsible part of me doesn’t want to put people through sh-t.” She looks at Strayer and Maguire. “I feel like you might’ve said something smarter or different,” says Strayer. “Well, I always wish I had said something smarter!” Maines replies. “But when I think back, it’s like that movie Sliding Doors, right? Where would we be today if I hadn’t said that? That’s interesting. I really don’t know if I would take it back.”

Whether Emily & Martie were mad: “For five seconds in the elevator,” Strayer says. “Really? You were mad?” Maines looks shocked. “It was that next day,” Strayer says. “I said something. You don’t remember that conversation?” “I don’t remember you being mad.” “Mad is not the right word, but I remember being in the elevator, and I was like, ‘I’m glad it wasn’t me.’ It was more like scared-mad.” “It was a bad situation,” says Maines.

Emily on how different music is these days: “At the Grammys, how many performances were with women playing instruments? Is it still surprising that a female can play an instrument proficiently?” Maines agrees: “I don’t know about you guys, but when I see a girl rip a guitar solo, I’m blown away. It’s still very rare.”

It’s weird to think “would you do it knowing what you know now?” And Natalie doesn’t really know. I think she probably would have said something similar, but maybe more well-thought out? I don’t know. I never understood why the crash was so immediate – obviously, country music was then (and is still now) closer to the GOP than the Democratic Party. And the “eve of war” bothered a lot of people too. But… it was done and Natalie was honest about how she felt then, and people massively overreacted. It’s so weird to think that just two years later, Kanye West did the “George Bush doesn’t care about black people” thing at the Katrina telethon. Seriously, JUST TWO YEARS LATER.

After 14 years, the @dixie_chicks still won’t back down and they’re here to reclaim their place amongst the greatest singer song-writers: “I felt the most pride in our last album—maybe it was worth the controversy. It was so personal and so honest; this album even more so.” Link in bio for the full cover story. — Photography by @lizcollinsphotographer Styled by @ patti_wilson Hair by @kevinryanhair Makeup by @yumilee_mua Nails by @ashlie_johnson Production by @jnproductionglobal