Home » Celebrities » Sha’Carri Richardson Shades Detractors: ‘Enjoy The (Olympic) Games We All Know It Won’t Be The Same’

Sha’Carri Richardson has reacted to her Tokyo Olympic Games disqualification, after testing positive for marijuana.

Sha’Carri Richardson has broken her silence after being disqualified from the upcoming Tokyo Olympic Games. The 21-year-old track and field star threw some shade at her detractors, and thanked her fans for their support, when she took to Twitter on July 4. “The support, my community I thank y’all, the negative forget y’all and enjoy the games because we all know it won’t be the same,” she began.

“I’m sorry, I can’t be y’all Olympic Champ this year but I promise I’ll be your World Champ next year. All these perfect people that know how to live life, I’m glad I’m not one of them,” she quipped. As many would recall, Sha’Carri came in first in the 100-meter race at the U.S. Track and Field Trials but was later disqualified after testing positive for marijuana. Sha’Carri apologized for her mistake in a TODAY interview and also tweeted a reference to the scandal, saying “I am human.”

The athlete’s biological mother passed away a few days prior to the race at the Olympic Trials in Oregon — where weed is legal — and the runner found out about the death from a reporter asking her about it. She told TODAY that finding out about her mother’s death sent her into “a state of emotional panic.” Sha’Carri later said, “I know what I’m supposed to do, and I know what I’m allowed not to do, and I still made that decision. I’m not making an excuse. Who am I to tell you how to cope? Who am I to tell you that you’re wrong for hurting?” 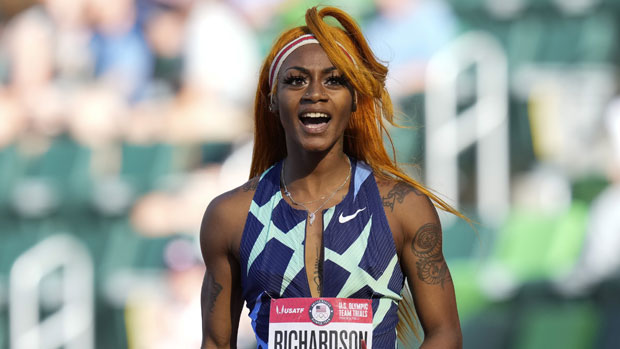 Although many celebrities threw their support behind Sha’Carri, including Odell Beckham Jr and George Takei, President Joe Biden said “rules are rules”. He added, “Whether they should remain the rules is a different issue, but the rules are the rules.” Meanwhile, Seth Rogen, who founded a weed brand, said, “The notion that weed is a problematic ‘drug’ is rooted in racism. It’s insane that Team USA would disqualify one of this country’s most talented athletes over thinking that’s rooted in hatred. It’s something they should be ashamed of. Also if weed made you fast, I’d be FloJo.”