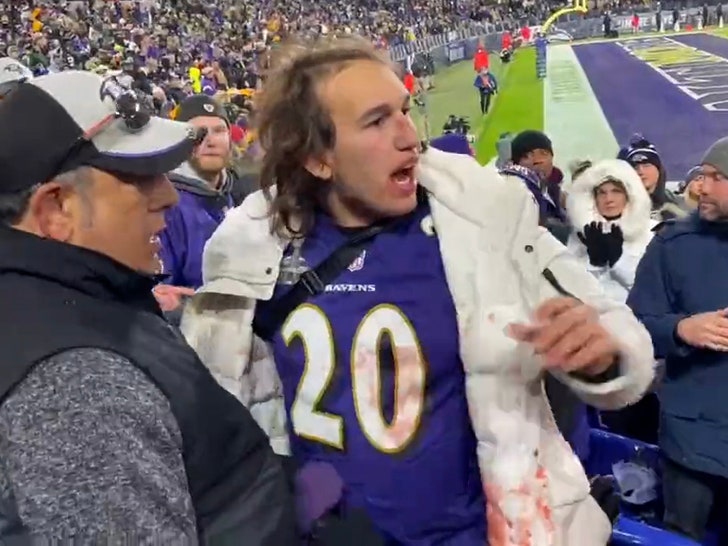 Packers and Ravens fans got into an all-out brawl during the teams’ game Sunday — and the action got so violent, one fan left the melee with his jacket covered in blood.

The wild scene all went down in the stands at M&T Bank Stadium in Baltimore … when Green Bay supporters began jawing with men in Ravens jerseys.

Unclear what initially started the arguments — but video from the scene shows a guy in a cheesehead hat appeared to ignite the physical fracas after he struck a Baltimore fan in the face.

Check out the video, as soon as the man was hit — fists flew everywhere, with roughly half a dozen people getting involved in the skirmish.

At one point, a Ravens fan wanted to insert himself so badly into the fight — he left his feet to jump on top of the crowd.

As security came to separate the combatants, you can see in the clip a woman appeared to have been struck in the cheek during the commotion, which caused one Ravens fan to yell, “Who the f*** punched her in the face?! I swear to f***ing God I’ll kill you!”

Eventually, security was able to gain control of the situation — though it’s unclear if any arrests were made. We’ve reached out to cops, but so far, no word back yet.

Of course, this is far from the first act of violence at an NFL game this season — fans have been fighting all year, including at the Rams vs. Bears game earlier in the season.