Home » Celebrities » Madison LeCroy Rocks A Neon Bathing Suit As She Swims With A Pig Amidst A-Rod & J.Lo Drama

Madison LeCroy is still enjoying her Bahamas getaway! While J.Lo and A-Rod make up in the D.R., the ‘Southern Charm’ star went swimming with pigs.

Madison LeCroy, 30, slayed in a neon pink one piece! The Southern Charm star was all-smiles as she posed with a pig in the Bahamas while swimming in the ocean. “Pig on pig,” she joked in her caption on the post, shared to Instagram on Saturday, March 20. The bubblegum colored “Pamela” swimsuit by Hunza G ($175) showed off her golden tan as she stood in the turquoise blue water, keeping her eyes and head covered from the sun with a Goorin Bros. hat.

The mom-of-one has been soaking up the sun all week in the Bahamas, and absolutely sizzled in a brown bikini on Thursday, March 18. In a ‘Bond Girl’-esque moment, Madison was seen emerging from the water after a dip to cool off in the 80 degree weather. She was smiling and laughing as her top accidentally revealed a nip slip, which she corrected. Later, she was seen laying down on a towel as she worked on her tan, opting to go topless on the beach. 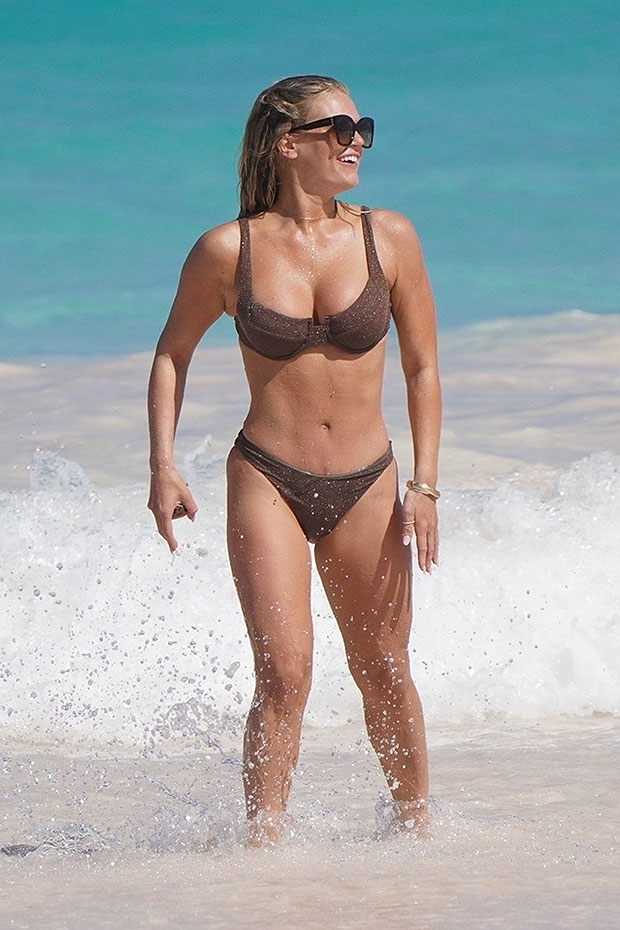 Madison’s trip comes amidst Jennifer Lopez and Alex Rodriguez‘s recent break-up and make-up. It was reported on March 12 that the pair called things quits after a two year engagement and four year relationship, however, they denied the split in a joint statement on March 13. “We’re working through some things,” a joint, issued statement read to People magazine. That same morning, J.Lo, 51, addressed the headlines in a clap back video set to Saweetie‘s viral freestyle “Pretty Bitch Music.”  The split came after rumors began swirling that the former Yankee player had begun an online relationship with Madison over FaceTime and Instagram DM. Madison later confirmed that they had been in touch, but Alex never “physically cheated.”

Since, Alex, 45, has flown down to the Dominican Republic where The Wedding Planner actress is working on her latest romcom, Shotgun Wedding. The former MLB star was seen kissing Jennifer in photos snapped on Tuesday, March 16 — seemingly confirming things are very much back on. J.Lo wore an all white ensemble as she sat at table next to a golf shirt clad A-Rod, who also posted about his trip on Instagram. “Happy Monday,” he captioned an IG story on March 15. “New week. New day. Onward. Upward.” A week ago, Alex also confirmed he’s “not single” to cameras who caught him heading to a Miami area gym.