Jazz Jennings is getting candid about her eating disorder and weight gain.

The 20-year-old I Am Jazz star took to Instagram to post a side-by-side photo of herself and open up about her binge-eating disorder, which caused her to “gain almost 100 pounds.”

“As many of you have noticed, over the past few years, I have gained a substantial amount of weight. I suffer from binge-eating disorder, a disease in which I’m not only addicted to food, but I eat it in large quantities,” she began. “My binging, along with an increased appetite I experience from some of the meds I’m on, has caused me to gain almost 100 pounds in a little less than 2 years.”

She explained that she posted the side-by-side to hold herself accountable, as she’s “ready to change my ways.”

“I’ve been saying I’m ready to turn over a new leaf, but I’m running out of trees now. I’m ready to take the initiative and create positive changes when it comes to my health and body,” Jennings continued, adding that she has a “fabulous team supporting me, both professionals and family/friends.” “But at the end of the day, I have to be the one committed toward bettering myself.”

Jennings acknowledged that she has the power in her to lose the weight and plans to share her progress with all her followers. She concluded by thanking people for “understanding the battle” and that she’s “fighting to win.”

She also posted another photo of herself on her Instagram Story, captioning it, “Beautiful every shape and size.” 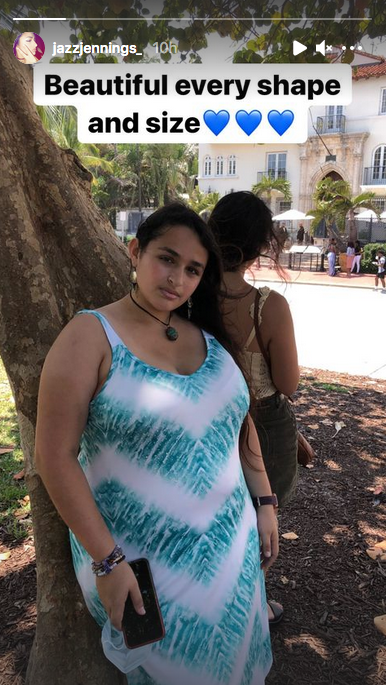 Over the years, Jennings has shared many life updates with her fans, including her journey being transgender. Earlier this month, in a new interview with Variety, the YouTube star shared why she needed to take a break from her reality show, which went on hiatus in 2019.

“I needed that break for my mental health and wellness, honestly. But I have had that time to really use self-care to boost myself up and evolve and grow as a person,” she told the magazine. “I still have so much more to go, but I just feel like I’m moving in the right direction.”

Jennings also explained that she, as one of the first transgender role models, has come to learn that she doesn’t have to be the sole person to represent trans youth.

“Definitely in the past I was the only kid or teenager who was transgender and so public,” she expressed. “But now there’s a lot of different transgender teenagers out there who are sharing their stories. It’s really cool to see that shift, that there’s some new people out there.”

Additionally, the reality star mentioned that fans will be able to see more of her current life as a seventh season of I Am Jazz is on the way.

“I am ecstatic to announce that there is going to be a season 7 on I Am Jazz. I am so thrilled, I am so excited to share the rest of my adventure, my journey of life with you all. And hopefully I can continue making an educational experience my sharing by story,” she said.

See more on Jennings in the video below.