If one of the touchstones as to whether humanity has truly entered the future is the scenario in which two of the richest men on the planet have entered into an argument concerning the fate of the moon, then welcome to the future, friends. According to a CNN report published on August 19, it seems that Elon Musk, the billionaire and tech disruptor who by all accounts currently lives in a box, and Jeff Bezos, the former Amazon CEO and founder who last made headlines for the glaringly phallic shape of his latest Blue Origin space rocket, have both set their sights on the human race’s eventual return trip to the Earth’s sole cosmic satellite.

Per the news network, Musk’s company SpaceX and Bezos’ own Blue Origin have both been developing vehicles and crafts for a future voyage to the moon, but it looks like NASA only has the capacity to choose manufacturer over the other due to budgetary constraints. With both Musk and Bezos vying for the sole open slot in a partnership, NASA has finally chosen its victor.

So, who is NASA going to have jump on board? And what consequences has the organization’s choice had on the relationship and/or rivalry between Bezos and Musk? Read on after the jump to find out. 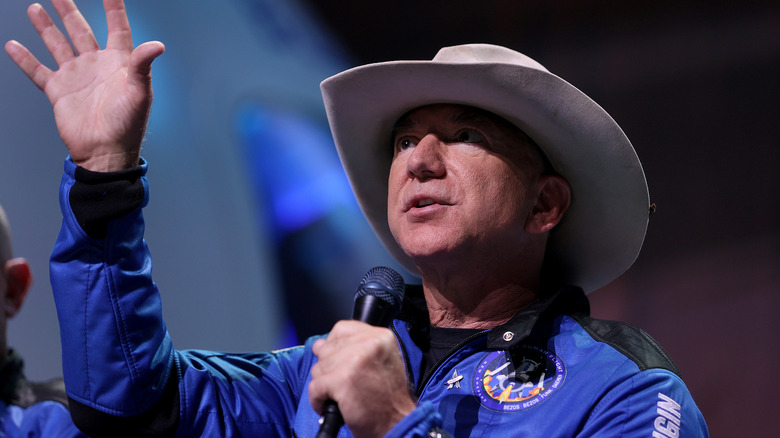 Per CNN, NASA ultimately decided to go with Elon Musk’s SpaceX as a contractor to develop a Human Landing System for a man-moon mission set for 2024. Originally, SpaceX and Blue Origin both had contracts with NASA. But as CNN explained, those contracts were put in jeopardy after NASA was allotted a budget of less than $1 billion, a third of NASA’s proposed $3 billion budget. After bids were put forth by Musk and Bezos’ respective companies, SpaceX eventually won out.

To add salt to the wound, Musk’s bid was half of Bezos’ $6 billion offer. (As CNN noted, Musk’s proposal for his HLS design and technology is a little more out-of-the-box than Bezos’, which could have been why NASA ultimately went with Musk for the project.)

Bezos’ subsequent reaction to the perceived slight might be the diametric opposite of Musk’s reaction to the historic firsts of his fellow space race competitor, Richard Branson. As CNN noted, Bezos filed a federal lawsuit against NASA, per CNBC. Turning his eye to Musk, Bezos launched a de facto smear campaign against SpaceX in an infographic on the Blue Origin site, calling Musk’s tech “high risk.” In response, Musk tweeted on August 11: “[if] lobbying & lawyers could get u to orbit, Bezos would be on Pluto [right now].” While Musk appears to be sure of his contract, only time will tell if the federal courts will favor Bezos’ suit.