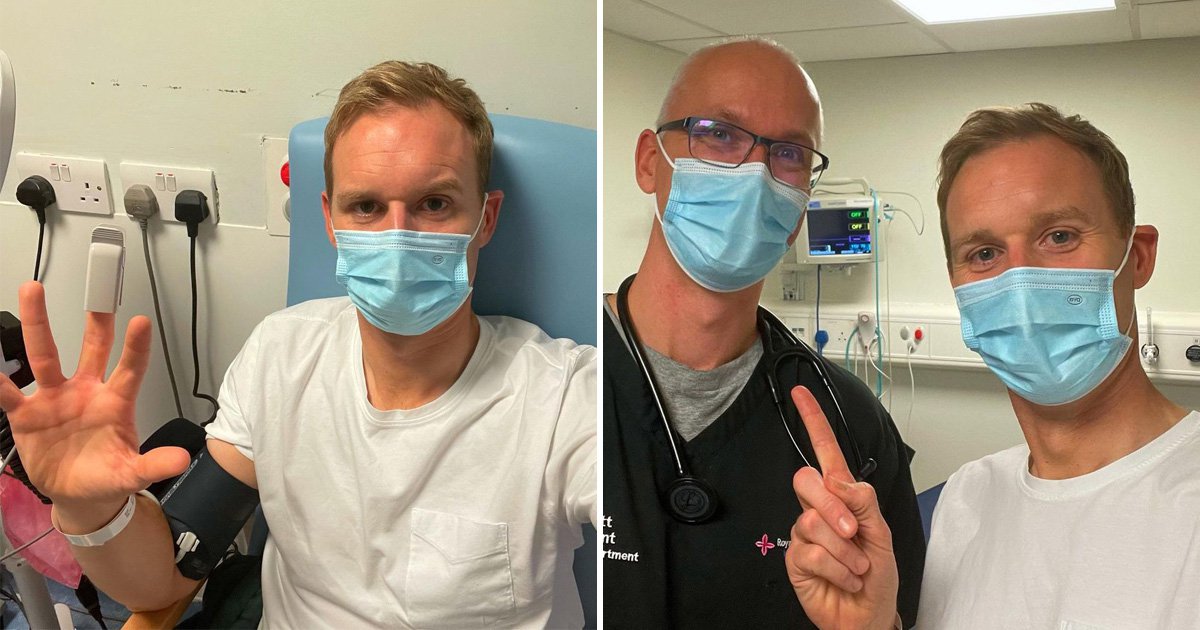 Dan Walker has been sent to hospital after hitting his head in a ‘stupid’ injury.

The 44-year-old revealed yesterday that he smacked his head on a glass door, and had been left with a nasty bump.

Taking to Instagram, the star – who is gearing up for his Strictly Come Dancing debut – shared a health update with fans, and revealed he was feeling ‘wobbly’ after the incident.

Alongside snaps from A&E, he told concerned followers: ‘Bit of head-based drama today!

‘After whacking my noggin on the big glass window yesterday I got sent to A & E today because I was feeling a little wobbly.

‘A lovely nurse at Barnet Hospital called Karina checked my vitals and 6ft 9 Consultant Erik Witt gave me a CT scan to check for a bleed on the brain. Thankfully… All ok.’

‘I’ve got to rest for a couple of days – so I’ll be a bit behind – but ready to dig in again next week,’ he continued, before giving his mystery Strictly professional partner a shout-out.

‘A timely reminder of how amazing the NHS is and, even though I’m not allowed to tell you who my Strictly pro is… I can tell you that she waited for hours in the car park to make sure I was ok.

‘Whatever happens on the telly… she has a friend for life.’

Right on cue, Dan’s famous friends and fans rushed to offer their support, with his Strictly co-stars leading the way.

Adam Peaty replied: ‘Sending all my love and energy mate.’

Graziano Di Prima said: ‘Have a good recovery my friend.’

The BBC Breakfast star unveiled a huge bump on his forehead in a selfie on Thursday, explaining that he ran straight into a glass door by accident, after he left his wallet in a car.

‘I’ve done something completely stupid. I left my wallet in the taxi as I checked into a hotel,’ he captioned the post. ‘I ran back out to chase the driver and ran straight into a giant glass door which I thought was open.

‘Full deck on the floor, gasps in the restaurant… lump on the head. Thankfully… I still remember the routine.

‘I got the wallet back as the driver had stopped for a fag around the corner.’

Dan is set to make his debut on the Strictly dance floor in an episode airing tomorrow, ahead of the competition kicking off later this month.

We will finally learn the identity of his mystery dancer who supported him in hospital, as well as the other partnerships for this upcoming series.

Strictly Come Dancing kicks off on Saturday, on BBC One.