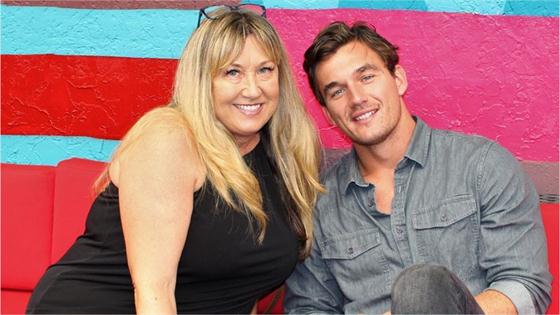 Tyler Cameron and his brothers are mourning the death of their beloved mother, Andrea Hermann Cameron.

On Tuesday afternoon, The Bachelorette star opened up for the first time since his mother’s passing. Cameron took to Instagram to write, “Today heaven gained an angel. We will love and miss our mother dearly. She will live on through us and through those that she has had an impact on. While we grieve, we ask for two things: First, tell those you love that you love them; and second, please let us take this time to celebrate her life in private. Thank you for all your love and support.”

Earlier this morning, The Palm Beach Post revealed the cause of death of Cameron’s mother, citing that she suffered from a brain aneurysm on Saturday, March 1. The Jupiter, Florida real estate agent was 55.

Cameron and his brothers Ryan Cameron and Austin Cameron also spoke to the publication about how their late mother was “super supportive” and “amazing.”

Specifically, the brothers said their mother was all-in when it came to rooting for the former Bachelorette star.

“She was super supportive,” Cameron said. “But what was so amazing … she was supportive for (season star Hannah Brown) and everyone else who was a part of that show but she was also supportive to the random fans.”

Her sons also spoke about she was always looking for ways to help her community and give back.

“My mom didn’t care who you were, where you came from, what you’ve done or anything at all,” Ryan told the publication of his mother. “She saw everyone as the same. She just wanted to help everybody and help them out with whatever they needed help with.”

The former Bachelorette star also spoke fondly of his mother’s cheerful and carefree outlook on life. “She could have fun, I could tell you what,” Tyler said recalling the time she accompanied him to the People’s Choice Awards last November. “It hurts because there were so many cool things for us to do down the road but I’m grateful I got to spend that kind of event and moment with her.”