A NEW mum has publicly shamed her ex for leaving her for a 16-year-old, but people claim she’s the one in the wrong.

Taking to Facebook, the mum shared a photo of her baby wearing a brand new babygrow. 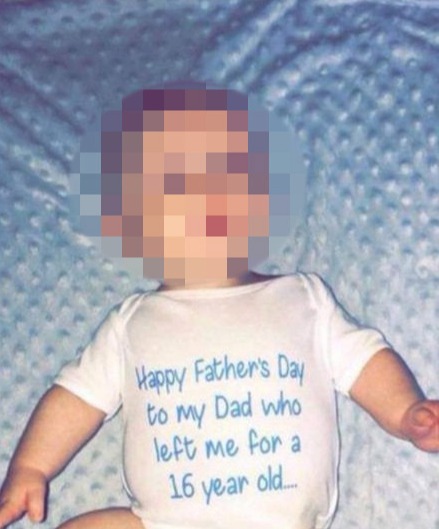 The all-in-one was printed with the words: “Happy Father’s Day to my dad who left me for a 16 year old…”

Captioning the photo, the mum wrote: “Just a quick message to my children’s dad. Happy Father’s Day, hope you have an amazing day.”

“You deserve it more than anyone,” she added with her post clearly dripping with sarcasm.

Her post has since been shared on Reddit and despite the dad’s clear indiscretion, it was the mum that many users were quick to point the finger at, dubbing her ‘trashy’.

Commenting on the post, one wrote: “It's so frustrating knowing that there's people in this world who think airing-out-their-dirty-Laundry publicly somehow gets back at somebody else.”

“Good luck to the kid, sounds like mom and dad are two pieces of work,” added another, while a third wrote, “Even the kid is like ‘WTF mom?’”

Another commented: “The mom and the dad are both trashy imo.”

In other parenting news, "big baby" became a viral sensation after his mum woke up one day and vowed to make him famous… but not everyone’s a fan.

Meanwhile this size six woman gave birth to a giant 11lb baby boy after people mistook her bump for twins.

Plus this three-month-old baby became a celebrity thanks to his resemblance to Boris Johnson.