The homophobic slurs hurled at gay professional soccer player Josh Cavallo at Melbourne’s AAMI Park on the weekend have been drowned out by the deafening support of US fashion brand Ralph Lauren.

The Adelaide United defender has started work with Ralph Lauren as the broad-smiling face of a new high-performance polo-shirt, 10 weeks after coming out in an emotional social media post that went viral, and days after enduring hate speech at a match against Melbourne Victory. 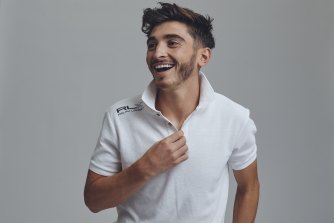 “Being a face of something that is going to be launched worldwide is pretty big,” Cavallo, 22, said. “What brought me close with Ralph [Lauren] is that it strives for diversity and inclusion and respect for human rights. I have the same morals that Ralph does.”

It’s an exciting first step into the luxury fashion arena, which has been lucrative for gay athletes such as US freestyle skier and sometimes Ralph Lauren and Prada model Gus Kenworthy. Soccer player Megan Rapinoe, who has worked with Loewe and British Olympic diver Tom Daley, a Dior regular, have been welcomed into high fashion’s inner circle as guests at The Met Gala.

For Cavallo the transition from player to pin-up and red carpet regular will require some adjustments. “I’m not used to having people put make-up on my face and do my hair,” Cavallo said. “I want to do my hair. But it’s a process I am learning that I have to go through. It’s really fun and exciting.”

The alignment between Cavallo and Ralph Lauren represents a shift in public attitudes that goes beyond the world of high fashion according to Dr Nitika Garg, associate professor at UNSW and a specialist in consumer behaviour. 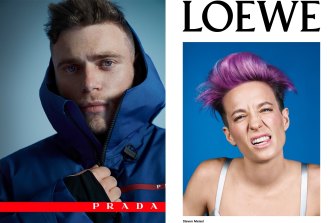 US freestyle skier and Olympian Gus Kenworthy and soccer player Megan Rapinoe have both found support as openly-gay athletes from luxury fashion companies such as Prada and Loewe.

“Fashion brands traditionally target Gen Z and Millennial consumers, and they know that these consumers will be more accepting,” said Garg. “A company like Woolworths taking the same steps might backfire in the short term.”

“But Ralph Lauren has been around for a while and their audience is not the segment at the forefront of these changes, so they are engaging in a push-pull strategy.”

That strategy involves dragging reluctant brand fans towards greater acceptance. “Fortunately there seems to be a shift in values,” Garg said. 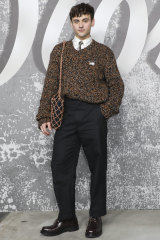 It’s a dramatic shift since the eighties, when lesbian tennis champion Martina Navratilova struggled to find endorsements, and in 1994, when diver Greg Louganis declared his sexuality and HIV status, only to be dropped by sponsors. As recently as the 2008 Olympic Games in Beijing, gay Australian diver Matthew Mitcham was ignored by major companies following a gold medal performance, until Telstra signed his services the following year.

“If you go back five or 10 years ago, one of the reasons why athletes didn’t come out about their sexuality was the fear of limiting their endorsement opportunities,” said Andrew Purchas, co-founder of national sport inclusion program Pride In Sport. “Now not only is it not seen as an impediment, but it can be a positive thing with companies wanting to work with people who are open and expressing their authentic self.”

Ralph Lauren’s commitment to inclusion can be seen by its role as sponsor of the LGBTQI+ Glam Slam at Melbourne Park from January 28.

“The connection of my coming out story and their values attracted me to wanting to work with them,” Cavallo said. “I want to help uplift, encourage and show people that it doesn’t matter what background you come from, the colour of your skin or whether you are gay or straight. They involve everyone.”

Having reflected on the homophobia he experienced at his last match, Cavallo isn’t worried about outbursts from the crowd at Melbourne Park this Sunday, when he demonstrates the high-performance properties of the polo shirt at a tennis clinic.

“Unfortunately, as a footballer and a sports athlete you’re going to get hate regardless. It doesn’t matter if its about you or what you did on the field. It was an exciting moment for me to see how the crowd reacted when there was something like that going on. I’ve gotten a lot of support and messages from people saying that the behaviour was not on and that they said something to the crowd and stood up for me… I’m just getting a big hug from everyone.”

Make the most of your health, relationships, fitness and nutrition with our Live Well newsletter. Get it in your inbox every Monday.

Most Viewed in Lifestyle