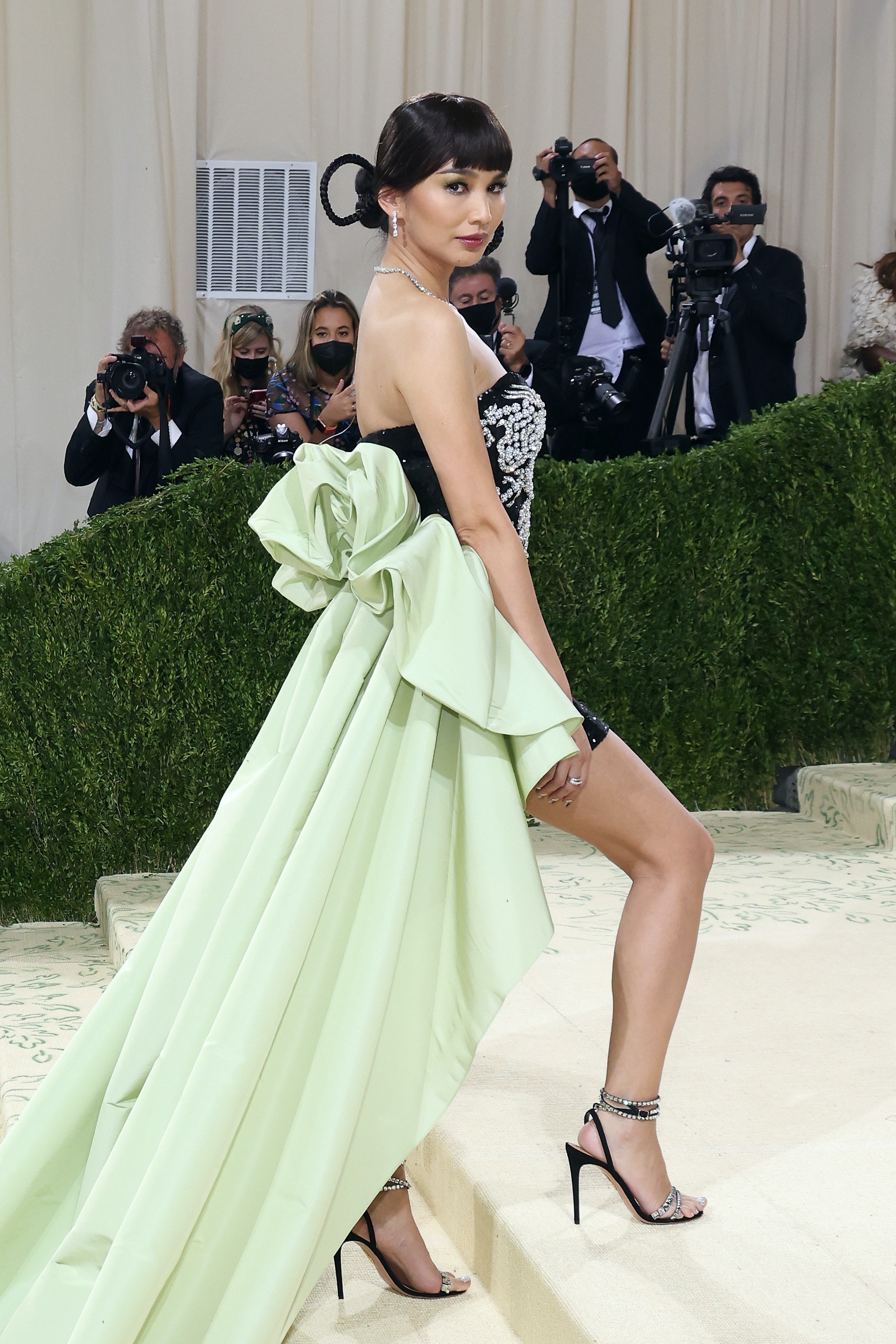 If we learned one thing from last night, it’s that when celebs hear American fashion, their minds immediately go to old Hollywood. As a result, the 2021 Met Gala red carpet was covered in modern takes on Marilyn Monroe, Josephine Baker, and Bing Crosby, as well as more recent American figures like Jerry Hall and Diana Ross. The references were everywhere, showing themselves in the tailoring of suits, the placement of jewels, and the hairstyling. It also helped that many of the attendees with referential looks shared their inspiration on social media following the red carpet, but, just in case you missed it, here’s a breakdown of every reference to old Hollywood style made at the Met Gala on Monday night.

When Billie Eilish approached Oscar de la Renta’s creative directors, Fernando Garcia and Laura Kim, to design a gown for the Met Gala, she had two major inspirations in mind: Marilyn Monroe and Grace Kelly. Armed with her newly-blonde hair and a desire to shock the world with a look so not traditionally Billie, she hoped to look like an old Hollywood starlet in a 15-foot ball gown as she walked up the Met’s stairs, and she succeeded.

YouTuber Nikkie de Jager aka NikkieTutorials paid homage to Black Trans icon, Marsha P Johnson during her first-ever Met Gala appearance. The beauty blogger, who came out as trans in January 2020, sported a ribbon at the base of her dress that read, “Pay it no mind,” Johnson’s famous phrase. Jager also wore a flower crown that resembles the one Johnson is wearing in the most prolific picture of the activist.

Kendall Jenner shared the inspiration for her bejeweled gown on her Instagram Stories on Monday night. Ahead of her arrival at the Met Gala, the model posted photos of Audrey Hepburn in the 1964 film, My Fair Lady. Jenner’s dress is inspired by one worn by Hepburn’s character, Eliza Doolittle, when she attends an embassy ball in the film.

Jenner’s after-party look—a red mini Givenchy gown with a long train—was also inspired by Hepburn and a dress she wore in the 1957 film, Funny Face.

Audrey Hepburn as Eliza Doolittle in My Fair Lady.

Yara Shahidi revealed that world-renowned performer and activist, Josephine Baker was her inspiration for her Met Gala look, and it was Jason Bolden, as well as Dior’s creative director, Maria Grazia Chiuri, who brought her vision to life in this strapless column dress.

While her sister, Chloe Bailey, had some hints of Marilyn Monroe inspiration in her white Rodarte dress, it was Halle’s pink mini that really stole the show, reference-wise. The sequined fringe and the plunging v-neckline gave major Tina Turner energy, just as the young performer intended.

For Kaia Gerber’s first-ever Met Gala, she was inspired by another dress worn at the event—back in 1981. The models’ Oscar de la Renta gown paid direct homage to a Dior dress worn by Bianca Jagger exactly 40 years ago. While the two looks are very similar (Gerber also wore her hair in a similarly curled bob), the modern version does have a slightly more revealing top, adding a touch of sex appeal to the otherwise understated dress.

The Talking Heads frontman’s denim suit looked to be almost an exact copy of a Levi’s tux once worn by fellow singer, Bing Crosby. Following the red carpet, 3.1 Phillip Lim shared a story on their Instagram about a time when Crosby was denied access into his hotel room for wearing jeans, which lead Levi’s to create the denim tuxedo for him.

While at the Met Gala, Megan Thee Stallion revealed that in her pink, ruched dress, she would like to be referred to as Megan Monroe. “I just feel like the hot girl culture needs to give Hollywood glamour,” she said on the Vogue livestream during the event. The rapper’s transformation was made complete with some old-style finger waves and the dress’ sweetheart neckline.

While at first, it seemed like Olivia Rodrigo was going for a “Sandy in the last scene of Grease” look for her first Met Gala, the singer later revealed her real inspiration for her custom Saint Laurent garment on her Instagram Stories. Rodrigo shared a photo of model Jerry Hall in the 70s, wearing a black lace catsuit, very similar to the one Rodrigo wore on the red carpet.

Gemma Chan’s custom dress paid direct homage to one worn by Anna May Wong, the first Chinese-American Hollywood actress. Chan’s Prabal Gurung look also featured dragon embroidery, traced from a textile for a handscroll from the Met’s collection. According to Chan, the textile date back to the Qing dynasty (1644–1911) and the Kangxi period (1662–1722).

Keke Palmer kept things simple in a slinky, golden turtleneck dress by Sergio Hudson, but the styling of her look made it clear she was inspired by none other than Diana Ross.

Rosé made K-Pop history when she walked the red carpet at the Met Gala, being the first female K-Pop idol—alongside former 2NE1 member CL— to do so. For this historic moment, Rosé wore Saint Laurent, specifically, a little black dress adorned with a white bow detail on top, a direct reference to a dress once worn by Marilyn Monroe.

Though Lourdes Leon didn’t address the inspiration behind her pink Moschino dress, it seems obvious that the whole look was inspired by Cher. Between the floor-length, straight black hair, the silhouette of the dress, and the Bob Mackie-esque stoning, it’s hard to imagine Jeremy Scott designing this look with anything else in mind.

Another unspoken, but seemingly obvious reference is Jennifer Hudson, who seemed to emulate Aretha Franklin in a scarlet red dress on the Met red carpet. The inspiration isn’t surprising, considering Hudson is currently starring as Franklin in Respect, a biopic about the powerhouse singer’s rise to fame.